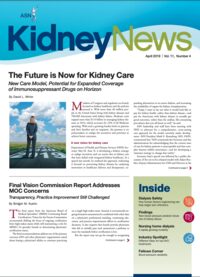 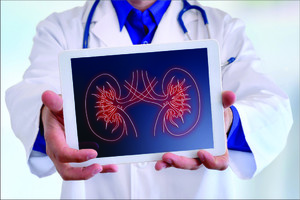 More than 2 million individuals die worldwide each year because they don’t have access to renal replacement therapy, a recent Lancet study suggested (1). In many low- and middle-income countries, patients cannot afford or don’t have access to dialysis or transplant, said Peter Kotanko, MD, research director at the Renal Research Institute in New York.

“There is clearly a great unmet need,” Kotanko said. “The main reason why dialysis is not delivered in these areas is because of the high cost.”

Now, mathematical modeling data suggest that it may be possible to use a healthy volunteer’s kidneys in lieu of dialysis.

Kotanko and his colleagues are exploring whether it would be possible to replace the need for a dialysis machine by creating a simple machine that would allow a buddy to filter toxins from a kidney patient’s blood through a dialysis membrane with their own healthy kidneys, a process they call allo-hemodialysis.

Using mathematical modeling data, the group demonstrated that it would be possible to achieve adequate urea clearance from a 20 kg child through four 4-hour dialysis sessions with a healthy 70 kg adult. For an adult buddy to provide urea clearance for another adult, it would take 6 weekly sessions, the modeling suggested. Kotanko presented some of the group’s findings at ASN Kidney Week 2018.

The results are just the first step in many that would be needed to validate such an experimental treatment paradigm. Kotanko and his colleagues are currently doing laboratory experiments to determine the best strategies for anticoagulation in allo-hemodialysis. They hope to test allo-hemodialysis in animal studies next year.

“This is an amazingly clever idea,” said Roger Rodby, MD, professor of nephrology at Rush University Medical Center in Chicago. Rodby, who was not affiliated with the work, noted that many breakthroughs in medicine come from “out of the box” thinking.

Rodby cautioned, however, that the model focused on urea, the main toxin removed by dialysis. He noted that dialysis also performs other functions such as removing potassium and supplying bicarbonate, and it is not clear whether you could remove enough potassium or supply enough bicarbonate through allo-hemodialysis.

“Modeling should be done for the other ions [like potassium and bicarbonate] that you are affecting with a dialysis treatment to see if an expected balance could be achieved during the same treatment that modeling showed was effective for urea,” Rodby suggested.

He noted there may be other practical challenges as well, including potential bloodborne transmission of viruses or transfer of medications from one person to another.

“Putting two people on dialysis simultaneously would not be easy,” Rodby said. “The person with normal kidney function would have to sit there for 3 to 4 hours 4 times a week. That is a lot to ask anyone, but might be preferred to death of a loved one.”

In addition to validating that such a model would work, there are ethical issues that would need to be addressed. These would include the potential risks to the health of the buddy, such as potential exposure to viruses or catheter-related complications.

To address whether it was ethical to further continue the research, Kontanko consulted Nicholas Steneck, PhD, a professor emeritus of history at the University of Michigan and a research integrity consultant. In an e-mail interview, Steneck noted that allo-hemodialysis is still in the development stages, and it is too early to assess many questions about the potential risks and benefits at this point.

Steneck cautioned, however, that final judgments on ethics cannot be made until more research is completed on this intervention.

If the experimental technique is able to clear the next hurdles in research and development, Kotanko envisions that allo-hemodialysis sessions could be done at home using a very simple, inexpensive machine.

“We’re envisioning that the practical challenges will be much less compared to current home dialysis [options].”

So far, Kotanko said that colleagues he has spoken to in several countries including Taiwan, Sudan, and Mexico have been very receptive to the idea given its low cost and simple technology, although he acknowledged not all cultures may be accepting of the idea. He hopes the technology could ultimately provide a treatment option for patients without access to hemodialysis or transplant.