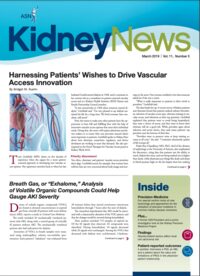 Obesity and related health risks, including diastolic blood pressure and fasting insulin level, are confirmed as risk factors for renal cell carcinoma (RCC), according to a study in the open-access journal PLoS Medicine.

Using a Mendelian randomization framework, the researchers analyzed gene variants associated with 13 obesity-related factors, identified from large-scale genome-wide association studies. The variants were used as proxies for measures of obesity, blood pressure, lipids, type 2 diabetes, insulin, and glucose. These factors were analyzed for association with the development of RCC in 10,784 cases and 20,406 controls. For each risk factor, odds ratios (ORs) for a 1-standard deviation increase in RCC risk were calculated.

Three measures of obesity were associated with RCC risk: body mass index, OR 1.56; waist-to-hip ratio, OR 1.63; and body fat percentage, OR 1.66. Significant associations were also found for diastolic blood pressure, OR 1.28, and fasting insulin, OR 1.82. Risk of RCC was unrelated to systolic blood pressure, lipid levels, overall type 2 diabetes, or fasting glucose. There was a “nominal” positive association for variants related to insulin resistance, rather than beta-cell dysfunction.

Observational studies have identified obesity-related factors associated with increased risk of RCC. However, these studies can’t show which obesity-related risks are directly related to the risk of developing RCC.

The Mendelian randomization study provides “robust and confirmatory evidence” that obesity is a risk factor for RCC. Diastolic (but not systolic) blood pressure and fasting insulin are also associated with RCC risk. The researchers conclude: “This study provided some novel insights into the pathways involved in mediating the risk increase in RCC that is caused by obesity, most notably through insulin and DBP, but further research is needed to fully elucidate the important relationship between obesity and RCC” [Johansson M, et al. The influence of obesity-related factors in the etiology of renal cell carcinoma—A mendelian randomization study. PLoS Med 16: e1002724. https://doi.org/10.1371/journal.pmed.1002724].