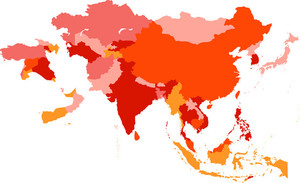 Challenges in estimating GFR in Asia

Asia, home to 60% of the world’s population, is a unique showcase of geographic, racial, and ethnic diversity that has potential implications for disease diagnosis and management. Use of serum creatinine–based estimated GFR (eGFR) equations for diagnosis and staging of chronic kidney disease (CKD) is a perfect example that exemplifies these challenges.

Dietary protein intake and muscle mass, key determinants of steady state serum creatinine, have not been factored into derivation of the GFR estimating equations. Race and ethnicity are indirect determinants of body composition (muscle mass) and dietary or environmental exposure. The currently recommended creatinine-based eGFR equations show variations between different racial and ethnic populations, which resulted in the need for a correction factor for black ethnicities. Asians usually have a smaller build compared to Western populations, and their dietary patterns are also different on account of cultural and religious beliefs. The impact of these differences on the performance of the equations and on calculating CKD burden are not known.

The Asian nephrology community has investigated the accuracy of existing eGFR equations, and where needed, developed correction coefficients for eGFR equations. These studies have been done in China, Japan, Korea, Thailand, Taiwan, Pakistan, and India. The coefficients for the MDRD equation ranged from 0.808 for Japanese to 1.223 for Chinese populations, which tells us that the true GFR would be over- or under-estimated for similar serum creatinine values if the original equation were to be used. For example, in Indian subjects, the CKD-EPICr equation overestimated the true GFR (as estimated by inulin clearance) by 24.9 mL/min/1.73 m2. Only 22% of the subjects had values within a 30% range (P30) of the true value. The Indian subjects were predominantly vegetarian, with a relatively low dietary protein intake and lower urinary creatinine excretion.

Differences in muscle mass and average dietary protein intake in different Asian ethnicities lead to different creatinine generation rates that might result in differences in performance of creatinine-based eGFR equations. Results from India suggest that measured GFR in otherwise normal predominantly vegetarian individuals of Indian ethnicity was relatively low (mean measured GFR 84 mL/min/1.73 m2). Several completely healthy individuals exhibited GFR that would put them in stage 3 CKD! This is an interesting observation. If GFR in a healthy population is low, questions arise regarding whether these individuals suffer from kidney disease or have low, but physiologically normal GFR. In this setting, the GFR cutoffs used for diagnosis and staging of CKD or for selecting living kidney donors would require validation.

The Asian nephrology community has debated whether a single eGFR equation can provide acceptable estimates of GFR in all Asian races or ethnicities. An attempt by CKD-EPI investigators to develop and validate a separate coefficient for Asians revealed divergent results in Chinese and Japanese validation datasets thereby reflecting possible differences in non-GFR determinants of serum creatinine in these populations.

The alternative might be to find another marker that does not depend so much on patient-related factors. Cystatin C has been proposed for some time now as an alternative. Indeed, unlike serum creatinine, its generation and steady state levels are independent of muscle mass and dietary protein intake. Cystatin C–based eGFR equations have been compared with creatinine-based eGFR equations in Japan, Singapore, and China. Data from these studies consistently show that cystatin C equations perform better, either by themselves, or together with serum creatinine.

Incorrect diagnosis of CKD in otherwise normal individuals and misclassification of stages of CKD are important clinical and public health concerns. In a Thai cohort of 5525 patients, prevalence of CKD stages 3–5 changed by an order of 7 times with the use of different equations, i.e., from 5.4% with use of the Thai GFR equation to 37.9% with that of the Japanese modified CKD-EPICr. This shows a huge variation in assessment of burden of disease with unvalidated eGFR equations.

Also, the impact of so-called low normal GFR in vegetarian populations as in India needs to be assessed by a long-term, community-based, prospective cohort study. Low GFR might be normal for this population and not necessarily put them at risk of kidney disease or adverse outcomes. If it were indeed true, using current definitions of CKD would classify normal individuals as having CKD, thus over-estimating the disease burden.

As the global nephrology community calls for appropriate responses by health systems to the prevailing kidney disease burden, it is our responsibility to derive tools to accurately measure this burden.

Valid eGFR equations will help with judicious allocation of resources and adoption of public health measures toward management and prevention of kidney disease. Also, these observations manifest the need to have measured GFR as the clinically relevant end point for research studies so that applicability is wide. Overall, estimating GFR in a diverse population as in Asia is a challenge. However, it is also an opportunity for the global nephrology community to study variations and refine disease definitions through collaborative research.