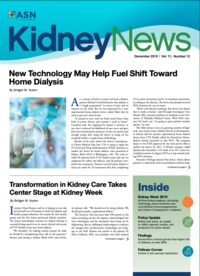 The Time is Now

A Perspective on the Opening Plenary at Kidney Week 2019

As representatives of the US Department of Health and Human Services (HHS), Centers for Medicare & Medicaid Services (CMS), and Center for Medicare and Medicaid Innovation (CMMI) joined the audience of thousands in the nephrology community from around the world, ASN President Mark E. Rosenberg, MD, FASN, kick-started Kidney Week 2019 with the opening plenary, galvanizing the political energy and opportunity of Washington, DC.

The field of nephrology has been subjected to decades of stagnation, largely resulting from lack of sufficient funding and innovation.

After a prolonged drought in innovation and regulatory adjustment in the kidney field, an alignment of opportunity is currently being seized by members of ASN, HHS and CMS with programs including KidneyX, the Kidney Health Initiative (KHI) and the recently introduced executive order on Advancing American Kidney Health (AAKH).

Acknowledging the struggle and lack of attention that kidney diseases have endured, HHS Secretary Alex M. Azar II remarked, “We were told that just identifying all of the problems in American kidney care, and all the opportunities we have to improve it, was more attention than federal leaders had paid to this issue in a long time.”

For far too long, nephrologists and patients have been subjected to the same suboptimal treatments. Dialysis has been the accepted treatment for kidney failure despite the prognosis of those requiring dialysis being worse than that for many cancers. Many of our patients die on the transplant waiting list with a shortage of organs and significant barriers to living donor transplantation. Over 37 million patients in the United States and over 850 million in the world live with kidney disease, with exponentially rising costs on the order of $35 billion per year in the US—from Medicare alone—with unacceptable outcomes including an over 50% mortality rate for kidney failure patients after 5 years. This unsustainable trajectory has finally led to a breaking of the dam, and as Dr. Rosenberg remarked, we have begun a “War on Kidney Diseases,” committing the US to a “system that pays for kidney health, rather than kidney sickness.”

The 2019 ASN opening plenary began with a focus on KidneyX, a public-private partnership to accelerate innovation. As of now, with the help of KidneyX, Redesigning Dialysis has become a reality as protoypes are being developed, with a future goal of an artificial kidney. In addition to KidneyX, the AAKH has outlined a comprehensive kidney health strategy to rise to the challenges in the kidney sphere including preventive care, dialysis innovation and increasing home dialysis utilization, and tackling the barriers to kidney transplantation, including addressing the organ shortage and facilitating living donation.

Additionally, members of CMS and CMMI have developed payment models geared toward incentivizing optimal dialysis modalities and improved quality metrics with a focus on increased utilization of home dialysis and ultimately transplantation. The FDA and Kidney Health Initiative (KHI) have begun collaborative efforts to focus on novel treatments to prevent progression of kidney disease, in yet another immensely powerful tool in the process of changing nephrology.

On November 6, 2019, I had the opportunity to talk with legislators on Capitol Hill along with 15 organizations representing 30 states during Kidney Community Advocacy Day (KCAD). When I first started speaking with legislators and staff years ago, they were not familiar with the burden of kidney disease that millions of their constituents have struggled with. At this year’s KCAD, however, they were able to complete my sentences before we even finished telling them about the need for expanding transplant immunosuppression coverage and protecting living donors with the Living Donor Protection Act.

Advocacy is working for our patients and the community, and transformation of kidney care is here—the time is now, and change cannot arrive fast enough.

“At this moment, a remarkable alignment exists among patients, researchers, clinicians, healthcare organizations, and policy makers. […] Today, now, is the moment for nephrology and for people with kidney diseases.” – Dr. Mark Rosenberg.