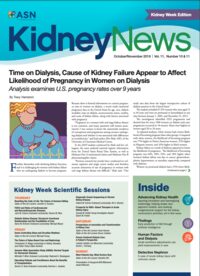 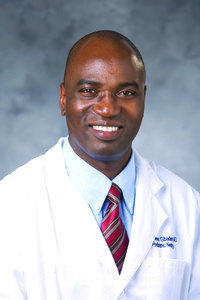 Study Targets Identified in Genome Study Will Be Lecture Subject

Dr. Gbadegesin’s research is aimed at understanding the genetic basis, pathogenesis, and determinants of variable responses to therapy in hereditary and idiopathic nephrotic syndrome. In the past 10 years, his team has identified at least five novel genetic causes of steroid-resistant focal segmental glomerulosclerosis and other kidney diseases. Recently, using the strategy of extreme phenotyping, his group identified the first exome-wide locus for childhood onset steroid-sensitive nephrotic syndrome. In collaboration with other investigators around the world, he has since validated this locus in other populations and identified additional loci.

He has established a large biorepository of phenotype data and biosamples from children with nephrotic syndrome. He is collaborating with other investigators to determine the biologic basis for ethnic disparities in the incidence and severity of nephrotic syndrome with the goal of developing strategies for personalized treatment.

Dr. Gbadegesin has presented his research at both international and national meetings and published almost 100 peer-reviewed journal articles, five textbook chapters, and 60 abstracts. He is the principal investigator on multiple National Institutes of Health, foundation, and industry grants. He was elected into the American Society for Clinical Investigation in 2016.

He served on the ASN glomerular disease subcommittee and is a council member of the American Society of Pediatric Nephrology. He is on the editorial board of JASN and associate editor of Frontiers in Pediatrics (Nephrology).