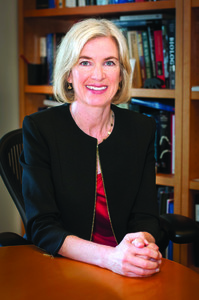 The discoverer of a revolutionary gene-editing technique will give a state-of-the-art lecture on “Rewriting the Code of Life: The Future of Genome Editing” at a plenary session on Thursday, Nov. 7.

Jennifer A. Doudna, PhD, is an internationally renowned professor of chemistry and molecular and cell biology at the University of California Berkeley. She and her colleagues rocked the research world in 2012 by describing a simple way of editing the DNA of any organism using an RNA-guided protein found in bacteria.

Her investigations into clustered regularly interspersed short palindromic repeats (CRISPRs) and the CRISPR-associated (Cas) enzyme Cas9 led to the transformative discovery of DNA cleavage by Cas9. Cas9 is an RNA-guided enzyme whose ability to cut double-stranded DNA can be programmed by changing the guide RNA sequence. Recognizing that this enzyme–RNA complex could be employed for precision genome engineering, Dr. Doudna’s team created a simple-to-use system that triggered a revolution in the fields of molecular genetics and genomics.

The CRISPR-Cas9 technology opened the floodgates of possibility for human and non-human applications of gene editing. It is being used in laboratories around the world to advance biological research by engineering cells and organisms in precise ways. This genome editing in animals and plants is revolutionizing the fields of medicine, genetics, and molecular biology in ways that will almost certainly lead to the development of new therapeutics, biofuels, and agricultural products. It is assisting researchers in the fight against HIV, sickle cell disease, and muscular dystrophy.

Dr. Doudna is the Li Ka Shing Chancellor’s Chair in Biomedical and Health Sciences at Berkeley and an investigator at the Howard Hughes Medical Institute.

She is the co-author with Sam Sternberg of A Crack in Creation, a personal account of her research and the societal and ethical implications of gene editing.