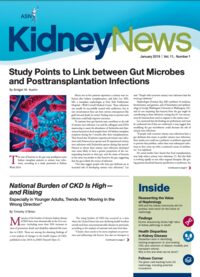 Nearly one-fourth of healthy adults participating in exome sequencing studies have “purportedly pathologic” variants associated with kidney and genitourinary diseases, according to a report in Annals of Internal Medicine.

The investigators performed a secondary analysis of exome sequencing data in 7974 adults who identified themselves as being in good health. Participants were enrolled mainly as healthy controls for genetic studies or as healthy family members of probands with suspected genetic diseases not involving the kidney or genitourinary tract. Exome data were analyzed for the presence of candidate pathologic variants of 625 genes linked to kidney and genitourinary disorders. The variants were identified from the Online Mendelian Inheritance in Man (OMIM) and Orphanet databases.

A potentially pathologic variant was reported for 23.3% of this sample of healthy adults. These consisted mainly of variants with “implausibly high allele frequencies.” The 25 most commonly reported genes—all discovered before release of the Exome Aggregation Consortium database—accounted for about two-thirds of participants with candidate variants.

Even after application of a more “stringent filtering pipeline,” 112 candidate variants were reported for 1.4% of participants. On manual classification, 63% of these variants were classified as being of unknown significance, 26% as pathogenic or likely pathogenic, and 11% as benign or likely benign. Manual classification identified variants that could lead to clinical follow-up in 176 participants. Clinical data were available for 26 participants; only 1 had confirmation of a genetic diagnosis (neurofibromatosis) without further clinical review.

Exome or genome sequencing can lead to incidental findings unrelated to the primary indication for sequencing. This study finds candidate variants previously reported as associated with kidney and genitourinary diseases in 23% of a large sample of self-reported healthy adults.