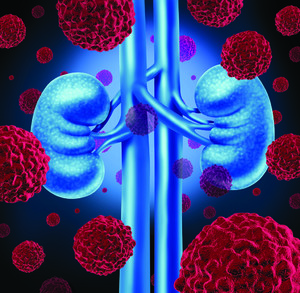 The discovery of a second protein that builds up in cells with a common genetic change has opened the door to investigation of an additional therapeutic target for the most common type of kidney cancer.

A study published in Science by researchers at the University of North Carolina Lineberger Comprehensive Cancer Center implicates the protein ZHX2 as a driver in clear cell renal cell carcinoma (ccRCC), which accounts for roughly 70% of all kidney cancers. This is the first time ZHX2, previously reported to be a tumor suppressor in liver cancer and lymphoma, has been implicated as a driver in ccRCC, said lead author Qing Zhang, PhD, an assistant professor at the UNC School of Medicine Department of Pathology & Laboratory Medicine and Pharmacology.

“This protein could be a potential therapeutic target used to treat kidney cancer on its own or in combination with other therapies,” he said. “The next step is to try to figure out how we can target it therapeutically.”

An important predictor of kidney cancer: loss of VHL

Scientists have long known that an important predictor for this type of kidney cancer is the loss of VHL, a gene that suppresses tumors by degrading proteins that are no longer needed, helping to maintain normal cell function. More than 90% of ccRCC patients experience genetic mutations that cause them to lose VHL function.

Previous studies have shown that VHL loss causes a buildup of the protein HIF2α, which turns on the gene VEGF, leading to cancer growth. Most current therapies for ccRCC focus on inhibiting HIF2α or blocking VEGF activity. But these therapies are only partially effective.

The need for alternative treatment pathways

“We have made significant therapeutic advances over the last 10–15 years in kidney cancer,” said UNC Lineberger’s William Kim, MD, an associate professor of medicine and genetics in the UNC School of Medicine. “No credit should be taken away from that work. There are studies that show that using these VEGF inhibitors prolongs patients’ lives. But in the end, a decent number of patients still don’t respond to the drugs and rare patients have long-term survival.”

Many kidney cancer therapies “have shown great promise, but 100% response is very uncommon,” agreed Armine Smith, MD, director of the Johns Hopkins Urologic Oncology Center at Sibley Memorial Hospital. “They keep the disease stable or shrink the tumor down, but usually the cancer does not go away. The cancer cells overcome the medications in multiple ways. They may shunt the medication out from the cell, or find ways of sequestering the medication inside the cell so it becomes less effective. Or, the cells produce a lot more of the target proteins and that just overcomes the effect of the treatment.”

Zhang said he asked himself if “maybe something else played an important role in driving kidney cancer? What else is out there besides HIF2α contributing to this process?”

To find out, Zhang and his team obtained a genomewide, human cDNA library of 17,000 encoded proteins and, using a comprehensive screening technique, looked “to see if we could find something in there that behaves like HIF2α,” he said.

“We wanted to see what other proteins bind to VHL. We found another substrate of VHL,” said Kim, explaining that their screening process revealed that “not only is HIF upregulated when VHL is lost, but so is ZHX2.”

By examining samples of tumors from seven ccRCC patients with VHL loss, they confirmed that tumors from those patients experienced a buildup of ZHX2. “We showed clinical relevance, because we found it in the patients, as well,” said Zhang.

To see whether reducing ZHX2 would shrink or stop tumor growth, the team then introduced tumor cells to the renal capsules of immunodeficient mice. After the tumors began to grow, the mice were fed with a special diet to induce ZHX2 depletion. “The tumors stopped growing and even shrank,” said Zhang. “That’s what we wanted to see.”

The authors concluded that “ZHX2 accumulates as a result of VHL loss,” said Zhang. “We think this accumulation turns on oncogenic pathways.”

The next step, said Kim, is to look for a drug that can either directly inhibit ZHX2 or a key downstream effector of ZHX2. It will take a lot more investigating to determine what that could be.

“We don’t have a known agent or drug that can do this yet,” said Zhang. “If we can develop a drug that inhibits ZHX2, we can slow the tumor growth. We have data showing that getting rid of ZHX2 will slow the tumor cell’s invasion.”

Such a drug could potentially be used in combination with HIF2α inhibitors or other therapies to provide a more effective treatment for ccRCC, the authors said, by targeting multiple pathways at once.

“Studies like this are important, because they delineate the underlying biology of kidney cancer and identify novel, distinct pathways to develop drugs against it,” Kim said.

“The novelty here is that we’ve found a pathway that’s turned on by the most commonly inactivated gene in clear cell kidney cancer, a pathway that appears to be completely independent of the HIF pathway. Hopefully in the future, this will allow us to develop a whole new class of inhibitors that can be used independently or combined with current inhibitors.”

But that’s still a long way off.

“This is basic work,” said Kim, “and while exciting, any extrapolation to patient therapy is still a bit away.”

One question that needs to be answered in determining whether ZHX2 is an appropriate target, said Msaouel, is whether doing so would cause unintended consequences.

“If ZHX2 functions as a tumor suppressor in different contexts, could inhibiting it promote the development of cancer in other tissues?” he asked. “We don’t know. These are clinically relevant questions that we need to elucidate as this pathway is being translationally investigated.”

“For example, we may find that it is not as fruitful to target ZHX2, as opposed to other downstream pathways. Finding out will allow us to be a little more precise in targeting this novel pathway,” Msaouel said. “In being more precise, we can potentially reduce toxicities and unwanted side effects.”

Zhang noted that “there is still some controversy” over whether ZHX2 actually functions as a tumor suppressor in liver cancer and lymphoma because its presence is amplified, or overexpressed, in most other cancers. “So in my mind, there should be more extensive research examining the role of ZHX2 in other cancers.”

Researchers may also find that they need to target ZHX2 only in cases of kidney cancer, he said. “It may be important to develop a drug specifically to target ZHX2 in kidney tissue to achieve this selectivity.”

“It’s promising,” said Smith. “I don’t think monotherapy for kidney cancer is the answer. This opens up a new avenue. It’s definitely exciting.”