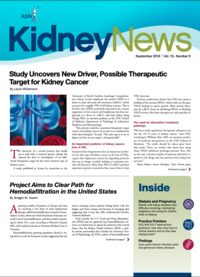 Advocates from Kidney and Transplant Community to Visit Lawmakers in September

On Thursday, September 27, 2018, a broad coalition of advocates representing patients and physicians from across the kidney and transplant community will meet with their lawmakers in Washington, D.C., to raise awareness of critical issues facing the kidney community as part of ASN’s fourth Kidney Community Advocacy Day (KCAD).

Recognizing the need to bring to lawmakers greater awareness of kidney diseases and the burden they place on over 40 million Americans, KCAD presents an opportunity for a community diverse in perspectives to speak in a unified voice. This year, participants will attend from 15 organizations representing patients, as well as kidney and transplant physicians, and will bring three key messages to their congressional delegations: increase investment in kidney research at the National Institutes of Health (NIH), support innovation in kidney medicine, including KidneyX, and co-sponsor the Living Donor Protection Act.

Advocates plan to build on the success of prior advocacy efforts to increase research funding and build support for innovation in kidney medicine. Last year, extensive work by advocates participating in KCAD and across the entire medical research community helped result in a historic $3 billion increase for NIH.

During KCAD, advocates plan to ask lawmakers for a $2 billion increase for NIH—an amount recently supported by the Senate in its final spending package—and draw attention to the groundbreaking research conducted at the National Institute of Diabetes and Digestive and Kidney Diseases (NIDDK) like the Kidney Precision Medicine Project, which aims to bring precision medicine to the kidney space.

Advocates will also call on Congress to support innovation in kidney medicine, including KidneyX, a public-private partnership led by the Department of Health and Human Services to seed, incent, and accelerate breakthroughs to promising new therapies for people with kidney diseases. Despite the significant burden of kidney diseases, there has been a dearth of innovation in the kidney space compared to other areas of medicine. During KCAD, advocates hope to create a sense of urgency among lawmakers about the need for innovation in kidney medicine and show that the field is ripe for investment.

Finally, KCAD participants plan to keep pushing Congress to pass the Living Donor Protection Act. Designed to offer job security through the Family and Medical Leave Act and to prevent life, disability, and long-term care insurance plans from limiting or denying coverage to living donors, the legislation is a longstanding priority of the kidney and a transplant community. Advocates see passing the legislation as a key step in removing barriers to transplantation and to increasing access to a life-saving therapy.

Undergirding advocates’ push during KCAD for congressional support of research and innovation is the uncertainty around the mid-term elections this fall. As races play out across the United States and Washington, D.C., prepares for a new Congress, maintaining the historic support for medical research and generating new enthusiasm among lawmakers—and new champions—is crucial. By participating in KCAD, advocates will demonstrate to Congress that the kidney community stands together in transforming care for the more than 40 million Americans living with kidney diseases.