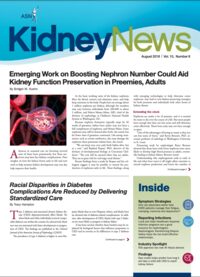 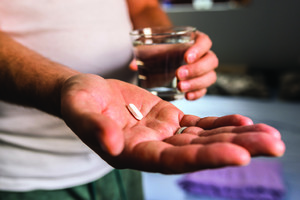 A teen adherence intervention improves the use of prescribed immunosuppressive medications in adolescent and young adult kidney transplant recipients, reports a randomized trial in the American Journal of Kidney Diseases.

The “Teen Adherence in Kidney Transplant Effectiveness of Intervention Trial” (TAKE-IT) included 169 prevalent kidney transplant recipients, aged 11 to 24 years. Patients were enrolled at least 3 months after transplantation at eight North American transplant centers between 2012 and 2016. One group was assigned to the TAKE-IT intervention, which included text, e-mail, and/or visual cue dose reminders. Every 3 months, patients met with a coach for review of adherence data. The intervention included an “Action-Focused Problem Solving” approach to address barriers to adherence identified by the patient.

Control patients met with coaches every 3 months but did not receive feedback on adherence. Males accounted for 57% of patients in the TAKE-IT group and 61% in the control group; median ages were 15.5 and 15.8 years, respectively. Adherence was electronically measured in terms of the proportion of prescribed doses taken as well as the timing of medication doses (between 1 hour before and 2 hours after the recommended time).

The analysis included electronic adherence data on 64 intervention patients and 74 control patients. Both adherence measures were better in the TAKE-IT group: odds ratio 1.66 for taking prescribed medications and 1.74 for taking doses at or near the prescribed time.

Self-reported adherence was high and similar between groups. There was no difference in the standard deviation of tacrolimus trough concentrations. No graft failures occurred. There were nonsignificantly fewer episodes of acute rejection in the intervention group. Statistical power for clinical outcomes was low.

Among kidney transplant recipients, graft failure rates are highest between the ages of 17 and 24 years. Low adherence to immunosuppressive drugs is thought to be an important contributor to graft failure in this age group.