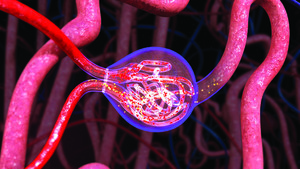 Advances in neonatal care are boosting survival rates of those born prematurely, but these survivors may later face kidney complications. New insights on how the kidney forms early in life and new tools to help monitor kidney development may one day help improve their health.

As the basic working units of the kidney, nephrons filter the blood, remove and eliminate urine, and help keep nutrients in the body. People have on average about 1 million nephrons per kidney, although the numbers may vary between individuals from 200,000 to about 2 million, said Marva Moxey-Mims, MD, chief of the division of nephrology at Children’s National Health System in Washington, DC.

Because nephron formation typically stops by 36 weeks of gestation, babies born earlier may not have a full complement of nephrons, said Moxey-Mims. Some nephrons may still be formed after birth, she noted, but far fewer than if gestation continued. Life-saving treatments, such as certain antibiotics, also may damage the nephrons these premature infants have, she noted.

“We can keep very, very early birth babies alive, but at a cost,” said Raphael Kopan, PhD, director of the division of developmental biology at Cincinnati Children’s. “The cost will be exacted when they are adults. They are at great risk for end stage renal disease.”

Recent findings from a study by Kopan and his colleagues suggest it may be possible to extend the production of nephrons early in life. These findings, along with emerging technologies to help clinicians count nephrons, may lead to new kidney-preserving strategies for both preemies and individuals with other forms of kidney disease.

Nephrons are under a lot of pressure, and it is normal for some to die over the course of a life. But most people have enough that they can lose some and still eliminate urine effectively. Those born early may not have enough to spare.

“One of the advantages of having so many is that you can lose some of them,” said Kevin Bennett, PhD, associate professor of radiology at Washington University in St. Louis.

Understanding why nephrogenesis ends so early in life and what lever turns it off might allow scientists to extend nephron production and boost the number of nephrons in premature infants.

Kopan and his colleagues started with two distinct ideas about how the process might work. One was that nephrogenesis could occur only during a set time period, much like the story of Cinderella, Kopan explained.

“When the clock struck 12, just like in the legend, the whole process ended,” he said.

The other idea was that a special niche in the kidney where nephron stem cells live disintegrates soon after birth, forcing all stem cells to differentiate, he said.

To test these ideas, he and his colleagues studied young and old kidney stem cells in the laboratory. It turned out both ideas were wrong. So, they took a closer look at what was happening in the cells.

“As often happens in science, it turned out something even more exciting was going on, which we did not anticipate,” Kopan said.

In a study they published in the Proceedings of the National Academy of Sciences, they manipulated genetic switches in the nephron-producing stem cells of mice to see how they affected nephrogenesis. If they completely eliminated the gene for the protein Mtor, which controls the metabolism and growth of cells, in mice, the animals died within 2 days of birth and didn’t have normal kidneys.

Mice with just one copy of the gene for Mtor lived, but had smaller kidneys with fewer nephrons. If they completely eliminated the Mtor regulator Tsc1 gene, which makes a protein called hamartin, the mice also died within 2 days of birth, likely owing to kidney failure. But mice with only one copy of the Tsc1 gene had about 25% more nephrons than expected because they produced nephrons through the 4th day of life, instead of ending nephrogenesis by the second day, which is normal for mice, Kopan said.

“It suggested there could be a molecular handle with which we can manipulate how long the period of nephron generation is in mice and then hopefully in [humans],” Kopan said.

Moxey-Mims called the findings “exciting,” but cautioned much more work would be needed to translate the findings into humans. These types of genetic manipulations would be difficult to do in humans because of ethical and technical constraints. Instead, they would likely have to find drugs that extend nephrogenesis by targeting specific molecular pathways.

“It’s a nice step in trying to help us learn a little bit more on a molecular level about what’s happening when nephrons are being formed and what types of things can impact how nephrons are formed,” she said.

Drugs targeting hamartin are likely to be too risky because the protein is a tumor suppressor. Mutations in the Tsc1 gene that alter harmartin cause tuberous sclerosis, a condition in which benign tumors form in the brains, kidneys, and other organs. But Kopan is hopeful it will be possible to find alternative nephrogenesis-extending targets that don’t interfere with hamartin’s tumor suppression. He also thinks there may be other strategies for extending nephrogenesis.

“Having found one, I’m absolutely certain there will be more genetic pathways that can have the same effect,” Kopan said. “There might be several different pathways that alone or synergistically will give you the desired effect.”

He and his colleagues are currently looking at all the proteins that hamartin may be acting on. They are also using large-scale genetic screening techniques to look for other nephrogenesis-extending genes.

“We are trying to use big data as well as classical mouse genetics and some elbow grease to try and figure out how to identify candidate pathways that are drug-able, which we could use to intervene,” he said.

Kopan cautioned that while the idea of extending nephrogenesis is very appealing, it is at least 30 years away from the clinic.

To target nephron-boosting therapies to the people who need them and to test whether such therapies work, clinicians need to be able to count nephrons in patients. Several groups are working on creating such tools.

For example, Bennett and his colleagues are working on a kidney-safe contrast agent that would allow clinicians to see individual nephrons in three dimensions in patients using magnetic resonance imaging (MRI). They’ve tested it in animals, as well as human organs not suitable for transplant, and are beginning the process of gaining U.S. Food and Drug Administration approval. This technique could be useful for many kidney diseases.

“Pretty much every possible type of chronic kidney disease involves some type of nephron loss, and the extent of that is really important to assess,” Bennett said.

It’s currently very difficult to assess the kidney health of those born prematurely, noted Jennifer Charlton, MD, MS, professor in the department of pediatrics at the University of Virginia in Charlottesville and Bennett’s collaborator. The size of the kidney is not a good indicator of nephron numbers, and the kidney is so good at compensating for low nephron numbers that problems often aren’t detected until they are severe, she said. For example, the kidney health prospects of a child with just one kidney may vary greatly.

“If that single kidney has 2.7 million nephrons in it, you’re fine,” she said. “You’re probably going to be good to go for the rest of your life. But if that kidney is less well endowed, and only has 500,000 nephrons in it, then you may be in trouble as you get to mid-adulthood.”

Being able to use imaging to count nephrons would help practitioners provide better care for these patients. It also could aid the development of drugs that are safer for the kidney by allowing researchers to monitor drugs’ effects on nephrons, Charlton said. It might also be used to match donor kidneys with the best patients. For example, Charlton explained, a kidney from a 70-year-old with 2.7 million nephrons could be matched with a patient with a longer lifespan.

“Matching up nephron number with the recipient could reduce the [number] of organs that we need over a lifetime, because you’re matching up kidney life with recipient life,” she said. “You wouldn’t have recipients dying with a graft that’s still functioning, or a recipient needing two or three transplants, because they didn’t have a good enough nephron endowment to begin with.”

Moxey-Mims cautioned that these nephron-counting tools aren’t yet ready for use in babies. If they do become available, they might allow neonatologists to monitor whether treatments are harming nephrons.

“The more we can understand about this and try to look at ways that we can mitigate the impact of prematurity, I think it’s helpful just in adding to our general knowledge down the road.”