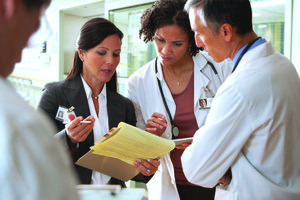 In dialysis patients with atrial fibrillation, the factor Xa inhibitor apixaban reduced the risk of major bleeding compared to warfarin in a nationwide sample, reports a study in Circulation.

Standard-dose apixaban is also associated with lower risks of thromboembolism and death compared to warfarin.

The introduction of direct oral anticoagulants has changed the approach to management of stroke risk in patients with atrial fibrillation. But the pivotal trials of these agents excluded atrial fibrillation patients with kidney failure. Some studies have reported adverse outcomes with dabigatran and rivaroxaban in this patient population. Standard-dose apixaban is approved for use in hemodialysis patients, but little has been known about the clinical outcomes.

The retrospective cohort study in Circulation included 25,523 Medicaid beneficiaries with atrial fibrillation who were receiving dialysis and were included in the U.S. Renal Data System from 2010 to 2015. The mean age of those studied was 68.2 years, and 54.3% of the patients were men. All the patients initiated treatment with an oral anticoagulant, and the 2351 patients taking apixaban were matched for prognostic score to 23,172 patients taking warfarin.

The apixaban and warfarin groups were compared for efficacy and safety outcomes: survival free of stroke or systemic embolism, major bleeding including gastrointestinal or intracranial bleeding, and death. Trends in apixaban prescribing were also analyzed.

Rates of apixaban treatment increased after its approval in 2013, and use of warfarin showed a corresponding decrease. By 2015, apixaban accounted for 26.6% of new oral anticoagulant prescriptions.

There were trends toward lower rates of gastrointestinal bleeding and death in patients receiving apixaban, but they were not significant. There were no significant differences in intracranial bleeding. Analysis of 580 patients who were originally prescribed warfarin but later switched to apixaban yielded similar results.

Within the apixaban group, 44% of patients received the standard dose of 5 mg twice daily, while 56% were prescribed the reduced dose of 2.5 mg twice daily. Compared to warfarin, standard-dose apixaban was associated with significant reductions in stroke/systemic embolism, HR 0.64; major bleeding, HR 0.71; and death, HR 0.63.

The only significant reduction was in major bleeding for patients receiving reduced-dose apixaban, HR 0.71. When apixaban-treated patients were analyzed with dose as a predictor variable, the standard dose was associated with reductions in stroke/systemic embolism, HR 0.61; and death, HR 0.64.

With apixaban accounting for more than one-fourth of anticoagulant prescriptions in kidney failure patients with atrial fibrillation, randomized trials are needed to confirm these findings, the authors noted.