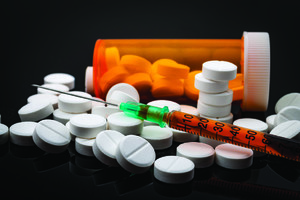 Adding to previous studies suggesting that illicit drug use is associated with the development of chronic kidney disease (CKD), new research indicates that it may also put patients with established CKD at elevated risk of disease progression and early death.

In the Clinical Journal of the American Society of Nephrology study, researchers assessed whether behavioral risk factors—including tobacco, alcohol, and illicit drug use, all of which may exhibit direct or indirect nephrotoxic effects—have an impact on the outcomes of patients with CKD.

They found that persistent use of hard illicit drugs was linked with a 25% higher risk for CKD progression and a 41% higher risk of dying compared with non-use of drugs.

For their analysis, the investigators examined information from the Chronic Renal Insufficiency Cohort Study, a prospective longitudinal cohort study including 3939 participants with CKD in the United States. Self-reported information on tobacco smoking, alcohol drinking, marijuana use, and hard illicit drug (cocaine, heroin, or methamphetamine) use was obtained at the start of the study and at annual follow-up visits.

“We hypothesized that each of the substances would be associated with higher risk of both CKD progression and death. Our hope was to identify important and preventable lifestyle risk factors implicated in the progression of CKD and death among patients with CKD,” said senior author Jiang He, MD, PhD, Chair of Epidemiology at Tulane University School of Public Health and Tropical Medicine.

Over a median follow-up of 5.5 years, 1287 participants experienced CKD progression and 1001 died. Baseline proportions of hard illicit drug use, tobacco smoking, alcohol drinking, and marijuana use were 12%, 13%, 20%, and 33%, respectively. Compared with non-use of hard illicit drugs throughout follow-up, persistent drug use was linked with a 25% higher risk for CKD progression and a 41% higher risk of premature death.

“The US is in the midst of an opioid epidemic, which has led to increases in the use and abuse of heroin. Additionally, efforts for the decriminalization and legalization of illicit drugs, especially marijuana, are gaining traction—for example, more than half of US states currently allow medicinal and/or recreational use of marijuana,” He said. “It is important to try to quantify the long-term health consequences of substance use, especially among vulnerable populations such as patients with chronic conditions like CKD, who are at high risk for poor health outcomes.”

Additional research is needed to determine how illicit drugs may affect kidney health.

The authors note that nephropathies of varying etiology—including glomerulonephritis, secondary amyloidosis, and heroin-specific nephrotic syndrome—are associated with heroin use, yet the incidence of heroin nephropathy has declined despite an increase in prevalence of heroin abuse.

Leal Herlitz, MD, Director of Medical Kidney Pathology at the Cleveland Clinic, noted that it will be important to consider the possibility that contaminants or other factors associated with consumption of these drugs are the driving factors behind the increased risk of CKD progression and mortality.

Herlitz, who was not involved in the study, also stressed that until this research was published, there was virtually nothing but anecdotal evidence regarding risk of CKD and use of marijuana or hard illicit drugs.

“It is notable that a third of respondents reported marijuana use . . . and that there was no increased risk for either CKD progression or all-cause mortality with marijuana use,” she said. “This is important information to have as marijuana is increasingly legal in the United States and it is likely that nephrologists will be seeing increasing numbers of patients who engage in either recreational or medical use marijuana. This study would suggest that marijuana use is far less dangerous to our patients than use of tobacco, cocaine, or heroin.”

“With the low proportion of patients reporting alcohol use, this study was not able to refine the difference between patients who engage in heavy alcohol consumption with either moderate or mild consumption,” Herlitz said.

Finally, not surprisingly, this study adds to the evidence that continued tobacco use is bad for your health.

“An increased risk of CKD progression was not found [for tobacco use], though this may be due to the relatively small proportion of patients who reported ongoing tobacco use and the fact that the increased mortality risk may eclipse the progression of CKD,” Herlitz noted.