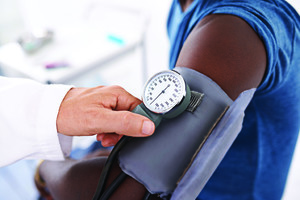 Full access
In young to middle-aged adults, higher fibroblast growth factor-23 (FGF23) levels are independently associated with rising blood pressure levels over time, according to a report in Hypertension.

The analysis included data on a multiethnic cohort of 1758 adults participating in the Coronary Artery Risk Development in Young Adults (CARDIA) study. All were free of hypertension or cardiovascular disease when participating in year 20 follow-up examination. At that time, the subjects’ mean age was 45 years—about 58% were women, and 40% were black.

Levels of C-terminal FGF23 at year 20 were analyzed for association with longitudinal BP levels and hypertension at years 25 and 30. Hypertension was defined as being on antihypertensive drugs and/or BP levels of 130/80 mm Hg or higher.

Relative risk of developing hypertension during follow-up was 1.45 in the highest quartile of FGF23, compared to the lowest quartile. Overall incidence of hypertension was higher in black than white participants: 47.7% versus 27.8%. Although black participants and women were more likely to be in the highest quartile of FGF23, the association with incident hypertension did not vary by race or sex. There was also no difference based on underlying kidney disease, which was present in only a small percentage of subjects.

Higher FGF23 levels have been linked to worse cardiovascular outcomes. The association of FGF23 with longitudinal increases in blood pressure, or with the increased prevalence of hypertension in black Americans, has been unclear.

These CARDIA study results suggest that higher FGF23 levels are associated with rising blood pressure over time, as well as with an increased incidence of hypertension. Higher FGF23 does not appear to explain the higher rate of incident hypertension among black compared to white participants. The researchers conclude, “FGF23 could have a clinical role as a novel marker in helping to identify individuals at higher risk of developing hypertension, beyond known risk factors” [Akhabue E, et al. FGF23 (fibroblast growth factor-23) and incident hypertension in young and middle-aged adults: the CARDIA study (Coronary Artery Risk Development in Young Adults). Hypertension 2018; https://doi.org/10.1161/HYPERTENSIONAHA.118.11060].