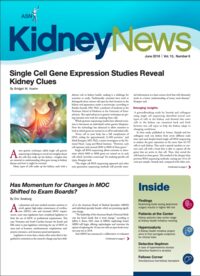 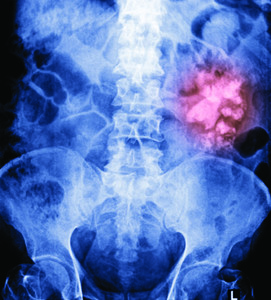 Kristi Ouimet is hopeful her 15-year-old daughter will be admitted into a clinical trial of an experimental treatment for hyperoxaluria, a rare kidney condition that causes formation of painful and even life-threatening kidney stones. If she is enrolled in the trial, it will require a monthly commute from California to Minnesota for 2 years. But she’s not deterred. She’s already managed 2 years of a 6-day-per-week commute for 4 hours of daily dialysis plus 7 days a week of peritoneal dialysis for her younger son, who is also affected by hyperoxaluria and required a kidney and liver transplant.

“[If] driving all through snowstorms in Minnesota is going to prevent her from having to experience what my son did, I’m there,” Ouimet said in an interview with Kidney News.

Ouimet and other patient advocates shared their perspectives about the disease and the need for treatment options at a February 2018 workshop convened by ASN’s Kidney Health Initiative (KHI). KHI is partnering with the US Food and Drug Administration (FDA) and other stakeholders to pave the way for development of new treatments or the repurposing of existing medications to treat kidney diseases. Hyperoxaluria is one of the first rare diseases that KHI has set its sights on. The goal is to help identify clinical trial endpoints and designs that pharmaceutical companies or researchers can use to test potential new therapies.

“We like to work on projects where there’s a clear need and then there’s also kind of a clear opportunity,” said Melissa West, project director for KHI. Companies are interested in producing medications for hyperoxaluria, but one of the hurdles is finding ways to measure if their treatments are working in clinical trials, she said.

Due to a missing liver enzyme, patients with primary hyperoxaluria have too much of the chemical compound oxalate in their urine, according to the Oxalosis & Hyperoxaluria Foundation. Oxalate is found in certain foods of plant origin, and most people are able to efficiently eliminate it through urine. But in people with hyperoxaluria, too much oxalate builds up and causes the formation of kidney stones and kidney damage.

“This is not your common kidney stone,” explained the Oxalosis & Hyperoxaluria Foundation’s Executive Director Kim Hollander. The stones form very frequently and they can be so large they must be surgically removed. Patients often require urgent medical attention with little warning.

“Although patients look fine from the outside, inside they’re like a ticking time bomb, and we just don’t know when it’s going to go off,” Hollander said.

Patients often face numerous surgeries to remove kidney stones, and the procedures and the stones themselves can damage their kidneys, Hollander said. Eventually, many patients with severe forms of hyperoxaluria face kidney failure. But the course of the disease is unpredictable. For example, Ouimet’s daughter had her first kidney stone at 3 years old and wasn’t diagnosed with primary hyperoxaluria until she was 5. She has had frequent surgeries since then to remove kidney stones. Ouimet’s youngest son was diagnosed via genetic testing while she was still pregnant with him. Despite her and her doctor’s awareness and monitoring of the condition, he went into kidney failure at just 5 months old.

“My children presented so completely opposite of each other, same environment, same parents, same everything,” Ouimet said.

There are also different types of hyperoxaluria. Primary hyperoxaluria, which affects 1 to 3 individuals out of a million people, is caused by genetic variations in one of 3 enzymes that are important in the production of oxalate by the liver, said Dawn Milliner, MD, a nephrologist at the Mayo Clinic’s Hyperoxaluria Center and principle investigator for the Rare Kidney Stone Consortium. The severity of the disease may vary based on which of the three enzymes is affected. Some people develop enteric hyperoxaluria as a complication of another condition. For example, Crohn’s disease or gastric bypass surgery may cause individuals to absorb too much oxalate from their food.

Despite how serious the disease is, treatment options are limited. Physicians have found ways to better manage patients’ symptoms, Milliner said. For example, patients can substantially increase their water intake to help prevent the formation of stones, and some can benefit from limiting oxalate in their diet, she said, but both are hard to maintain long term. About one-third of patients with primary hyperoxaluria type 1 (PH1) benefit from prescription strength doses of pyridoxine or vitamin B6, Hollander said.

“We’re trying to blunt the effects of the hyperoxaluria,” Milliner said. “We can slow it down, we can modify it, but nothing we have in our current armamentarium aside from the pyridoxine or transplantation really gets at the root of the problem and reduces the oxalate burden.”

A liver and kidney transplant can correct metabolic defects that cause a buildup of oxalate, but it comes with its own set of complications, including the need for lifelong use of immune suppressive drugs, said Milliner.

“Transplant is highly valuable where it’s needed, but none of us feel that’s the best long-term option,” she said.

Recently, promising new treatments have been identified that are now ready to be tested for both effectiveness and safety in hyperoxaluria patients, Milliner said.

The KHI workshop brought together patients, clinicians, FDA staff, and pharmaceutical companies to reach a consensus on how to best test new therapies. That starts with understanding patients’ needs, according to Hollander.

“The patients are looking to make sure their kidneys stay healthy for as long as possible,” Hollander said.

Given the high burden of existing treatments, and the anxiety of worrying about kidney failure, patients and care-givers at the workshop expressed a willingness to accept potential risks associated with clinical trials, said Jennifer Lawrence, a physician who has a son with hyperoxaluria. The Oxalosis & Hyperoxaluria Foundation is hoping to reach out to other patients and caregivers to find out their level of risk tolerance for trials.

Another goal is to design clinical trials that rigorously assess the safety and efficacy of potential kidney-preserving therapies. One challenge is deciding how to measure a treatment’s success. Kidney failure, the need for dialysis, or death are accepted ways to measure a drug’s effects. But trials using these endpoints would not be feasible because they would have to test very large numbers of patients and last for years because of hyperoxaluria’s variability among patients, Milliner noted. Assessing the development of kidney stones might be another endpoint, but the only reliable way to know if stones are forming would be to subject patients to multiple radiographic examinations, Milliner said. So, the KHI project is hoping to identify surrogate endpoints that can tell whether a treatment is providing a benefit to patients in a much shorter timeframe.

“Identifying a surrogate endpoint will allow us to look for a substitute for the progression of the disease since it takes so long for kidney failure to potentially show up,” West said.

To do this, the KHI project will tap data collected in US and international registries of patients with hyperoxaluria to try to identify factors that predict disease progression, West said. One promising surrogate endpoint might be to measure whether a treatment lowers urinary or plasma oxalate levels.

“What we all are struggling with is how much you have to reduce those [levels] so the patients feel better and survive better,” said Elisabeth Lindner, MS, MBA, chief operating officer of OxtheraAB, which is developing a drug for primary hyperoxaluria that would dissolve crystals in the kidneys and hopefully stop the formation of kidney stones. She noted that there are at least 3 other companies working to develop drugs that would decrease the production of oxalate.

One of the strengths of KHI in tackling these challenges is that the project brings the FDA into the conversation early in the process to ensure that surrogate endpoints would be accepted for drug marketing applications, West said. The project will also look to developing post-marketing safety studies that would be used to verify the safety and efficacy of new drugs over the longer term, West noted.

“The regulators at FDA on the medical side are very interested in joining these conversations and being helpful,” West said. “They still do require the evidence has to be there to support the decision to use a surrogate endpoint, but they’re very collaborative.”

Working together and developing a consensus around surrogate endpoints will also help advance the scientific understanding of hyperoxaluria, said Tracy McGregor, MD, MSCI, director of clinical research at Alnylam Pharmaceuticals in Cambridge, Massachusetts. Alnylam is developing a drug for primary hyperoxaluria that uses RNA interference to reduce the production of oxalate.

“Everyone brings a different perspective and we can all learn from each other,” McGregor said.