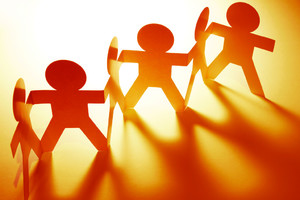 Am I my brother’s or my sister’s keeper?

In my community, one in every six adults has type 2 diabetes, and the top 10 causes of death are higher in every category than in New York City as a whole (NYC Department of Mental Health and Hygiene Vital Statistics, 2015).

Yet, this is Brooklyn, the “New Manhattan.” This is “New York, concrete jungle where dreams are made of; there’s nothing you can’t do. Now you’re in New York.” This may be the dream many aspire to as they hum Alicia Keys’s intoxicating refrain to the urban anthem, “Empire State of Mind,” but for those who live in Central Brooklyn, where the mortality rate is much less hopeful than that of the entire city, something is very wrong.

The disparities in health statistics are clear. How to reduce them and improve both health and quality of life for every- one is the question. Mobilizing individuals, families, and communities to assume more responsibility for their own well-being and empowering them to become part of the solution to achieving better health, even in the face of limited resources and suboptimal services, is important.

To achieve the aim of better health, community-based organizations in Brownsville and East New York (Brooklyn) came together in 2016 to form the Central Brooklyn Health Movement (CBHM). The Rogosin Institute, the initiating stimulus, and now anchor, for this health movement, tapped existing partnerships with community and faith-based leaders and with other healthcare providers to identify and support a core group composed of volunteers who recognize the health challenges they and their neighbors are facing, and, at the same time, are in the best position to help bring about the improvements in health and healthcare needed in that community.

For the past 2 years, these volunteers have conducted outreach and health education throughout Central Brooklyn as part of the Better Health Movement. They work within their communities to raise awareness of kidney diseases and promote healthy lifestyles for disease prevention. A goal is to continue to grow the number of individuals who are better-health activists and/or champions, progressively engaging more and more of the community in a transformative process that encourages active problem identification and solving in a setting of caring for one’s neighbor.

As a specific example of the power of such community action, let me tell you about the CBHM approach to increasing living and deceased kidney donation for transplantation. With the lowest (but improving) rate of organ donation registration in the country, New York has a lot of work to do to educate the public—education that could reduce the average 6- to 8-year waiting time for a kidney transplant in New York City.

Of course, New York state is not alone in the need to increase organ donation. The Obama administration recognized this as a national problem and in 2016 made increasing organ donation a priority by convening a White House Organ Donation Summit that involved dozens of companies, foundations, universities, hospitals, patients, and patient advocacy organizations, including the Rogosin Institute, and announcing new actions and commitments to increase organ donation and transplantation. The Rogosin Institute and the CBHM committed to an effort in Brownsville and East New York.

To catalyze action to increase organ donation and to reduce the unacceptable waiting time for a kidney transplant, the CBHM, led by Strong Power Consulting, Inc., a consulting firm that partners with faith-based organizations and a key CBHM/Rogosin partner, developed an outreach strategy to collect information on community awareness and attitudes around kidney disease and organ donation.

Through outreach at churches, community board meetings, tenant associations, colleges, senior centers, and community events, the Strong Power team collected some 10,000 surveys in Central Brooklyn. Survey analysis revealed that 62.5% of those surveyed were willing to give a living donor kidney, while 50% said they would agree to give one or both kidneys after death. At the same time, almost a third of those surveyed said they knew someone with kidney disease, and just below 30% knew someone who needed a kidney. Clearly, there is a great opportunity here to provide more kidneys for those who need them. The CBHM partners are now working to turn that level of willingness into actions that increase the rate of transplantation for its citizens and to promote kidney health and disease prevention more generally.

Beyond providing baseline data to help direct programming strategies to increase organ donation and also promote kidney health, the process of preparing and conducting the survey has resulted in the activation of a large group of community better-health advocates, including educators, tenant group leaders, elected officials, churches, housing developments, senior citizen directors, colleges, public schools, and community residents. This mobilization of the community is the heart of the CBHM: without this, there is no “movement.” In essence, the CBHM is an invitation to the community and individuals to take more responsibility for managing their own health, with particular emphasis on the prevention of chronic illnesses like diabetes and kidney diseases. Through the development of culturally specific grassroots education strategies and materials, as well as creating opportunities for reflection and open discussion about kidney health, chronic disease prevention, disease prevention, and organ donation, we are seeing what can happen when mobilization of local volunteers and multiple grassroots organizations get the word out that “My health matters!”

We are committed to the principle that community involvement, in partnership with professional health services of all types, can improve health and prevent disease. We believe the community must be involved if we are to see fewer of our fellow citizens suffering from end stage renal disease due to a lack of information, interest, or awareness. We have the opportunity through the CBHM and its partners to take charge and see that our communities, which are currently rated poorly with respect to health and life expectancy, become the healthiest communities in Central Brooklyn, especially with regard to kidney disease.

So, is it important to ask whether we, as residents in a given community, are really responsible for one another, especially with respect to health? In other words, “Am I my brother’s/sister’s keeper?” My answer is “Yes.” I believe we have a God-mandated responsibility to help those less fortunate than ourselves, and faith- and community-based settings can serve as vehicles to help us achieve this goal. The community must be at the table and must be part of the solution to achieving better health in Brooklyn. When models for improving kidney healthcare are under consideration, the role of the community as an active participant should always be included in the design.

The Rogosin Institute hosted its annual symposium and follow-up roundtable on the topic “New Models for the Prevention and Better Management of Kidney Disease: Saving Lives, Improving Quality, Reducing Costs” in late 2017. The speakers at the symposium and the participants in the roundtable represented a cross-section of patients, payers, providers, and community representatives, all of whom were concerned with both the prevention and the better care of kidney disease.

A critical question addressed at these sessions was the role of the community itself in realizing these objectives. Whereas the tendency has been to regard the community’s role as that of passive recipients of healthcare information and services, the following article by a representative of the Brownsville/East New York (Brooklyn) New York City communities and a roundtable participant demonstrates that the community can, and should, have an important role in models designed to prevent and improve the management of kidney disease, and in the reduction of health disparities more generally.