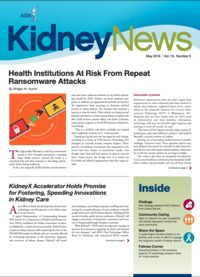 Early administration of caffeine citrate can reduce the risk of acute kidney injury (AKI) in preterm newborns, according to a study in JAMA Pediatrics.

The researchers analyzed data on a multicenter cohort of 675 preterm neonates enrolled in the “Assessment of Worldwide Acute Kidney Injury Epidemiology in Neonates” (AWAKEN). The infants were admitted to 24 participating level III or IV neonatal intensive care units. About 55% were male; mean gestational age was 28.9 weeks and mean birthweight 1285 g.

Acute kidney injury developed during the first week after birth in 18.1% of infants, based on the modified neonatal Kidney Disease: Improving Global Outcomes definition. The incidence and severity of AKI were compared for 447 infants treated with caffeine during the first week of life versus 228 who did not receive caffeine. Neonates treated with caffeine had younger gestational age and lower birthweight, were more likely to be intubated in the delivery room, and had lower Apgar scores.

Incidence of AKI was 11.2% in infants treated with caffeine, compared to 31.6% in those not treated with caffeine. The reduction in AKI risk remained significant after multivariable adjustment: odds ratio 0.20. Number needed to treat to prevent one case of AKI was 4.3. Among neonates who developed AKI, caffeine was associated with a lower risk of stage 2 or 3 AKI.

Preterm newborns are at high risk of AKI, with associated increases in morbidity and mortality. One single-center study has suggested that caffeine citrate, a methylxanthine, reduces the incidence of AKI in very low-birthweight infants.

This secondary analysis of multicenter cohort data suggests that treatment with caffeine reduces the risk and severity of AKI in preterm neonates. Further studies will be needed to identify the optimal timing and dosage of caffeine citrate therapy as well as the effects on long-term renal outcomes [Harer MW, et al. Association between early caffeine citrate administration and risk of acute kidney injury in preterm neonates: Results from the AWAKEN Study. JAMA Pediatr 2018; DOI: 10.1001/jamapediatrics.2018.0322].