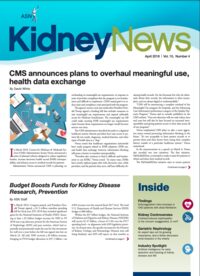 Current or past use of marijuana does not appear to affect the risk of developing kidney disease or decreased renal function, reports a study in The American Journal of Medicine.

The cross-sectional study included data from 13,995 respondents, aged 15 to 59, to the National Health and Nutrition Examination Survey from 2007 to 2014. Self-reported marijuana use, recent or past, was analyzed for association with renal outcomes: serum creatinine concentration, estimated glomerular filtration rate, and chronic kidney disease (stage 2 or higher).

In the nationally representative survey, 46.3% of respondents said they had never used marijuana, 39.3% were past users, and 14.4% were current users. Current marijuana users were more likely to be male, younger, and current alcohol and tobacco users. Unadjusted data suggested higher mean serum creatinine and lower mean eGFR in past and current marijuana users.

However, on adjusted analysis, none of the three renal outcomes was associated with marijuana use. Serum creatinine and eGFR showed an increasing trend in past and current marijuana users versus never-users, but these were not statistically significant. Sensitivity analysis limited to respondents free of cardiovascular disease also found no significant associations.

As more states legalize medical and recreational marijuana, use of this drug in the population is likely to increase. As for other acute and chronic health effects, little is known about how marijuana affects renal function.

This study—the largest of its kind—finds no clinically significant effect of past or current marijuana use on serum creatinine, eGFR, microalbuminuria, or stage 2 or higher CKD. While characterizing the results as “somewhat reassuring,” the authors note that their study provides no information on the renal safety of marijuana in heavy users, older adults, or patients with pre-existing CKD [Lu C, et al. Marijuana use and renal function among US adults. Am J Med 2018; 131:408−414] .