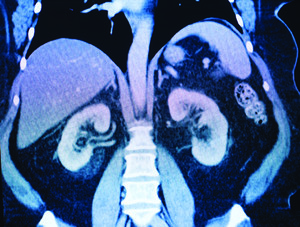 Contrast-Induced Nephropathy: Is the Concern Exaggerated?

Intravascular iodinated contrast has historically been considered a risk factor for acute kidney injury (AKI), particularly among individuals with underlying chronic kidney disease (1). Recent studies, however, have suggested that incidence of contrast-induced nephropathy (CIN) may not be as frequent as previously thought (2,3). In this commentary, we argue that contrast material can often be safely used without increased risk of AKI, even among individuals with underlying kidney disease.

Although the definition can vary from study to study (4), CIN is usually characterized by a 0.5 mg/dL rise in serum creatinine from baseline 24 to 72 hours following exposure (1, 3–5). In the clinical setting, CIN is usually a diagnosis of exclusion, as other causes of kidney injury may also manifest during this timeframe. Most studies on CIN, however, do not adjudicate records to confirm diagnosis. Thus, while the occurrence of contrast-associated AKI has been reported to be approximately 8–14% in the context of chronic kidney disease, this is likely an overestimation (3,5,6).

Moreover, patients who undergo imaging tests requiring contrast enhancement often have comorbidities that place them at increased risk for developing AKI. In a retrospective study of over 12,000 propensity score–matched patients who underwent either contrast-enhanced or unenhanced CT scans, McDonald and colleagues reported that incidence of AKI was independent of contrast material exposure (3). In another large study that also utilized propensity score matching, Hinson and colleagues found similar rates of AKI, regardless of baseline kidney function, among 17,934 patients who presented to a large urban emergency department and underwent contrast-enhanced CT (n=7201), unenhanced CT (n=5499), or no CT (n=5234) (2). The use of propensity score matching in these two studies minimized the likelihood of selection bias (2,3). It is interesting that risk factors associated with an increased risk of AKI included older age, administration of nephrotoxins, hypoalbuminemia, history of congestive heart failure, and underlying chronic kidney disease (2).

Certainly, one cannot account for all potential confounders in a retrospective study. Nonetheless, even if residual confounding were to exist, both studies suggest a low risk of contrast-associated AKI (2,3), particularly in the context of intravenous fluid administration (2). It is important to note that the number of patients with advanced chronic kidney disease (defined as a baseline estimated glomerular filtration rate [eGFR] <30 mL/min/1.73 m2) was limited, although even in this group there appeared to be no increase in risk for AKI with contrast-enhanced scans (2,3). The small number exposed, however, suggests that contrast is likely avoided in individuals with most compromised kidney function due to concern for kidney injury.

Even if patients develop AKI following the administration of contrast material, few have persistent renal impairment. In a recent 2 x 2 factorial trial in which 5177 patients undergoing angiography were randomized to receive intravenous bicarbonate versus intravenous sodium chloride and oral acetylcysteine versus oral placebo, 8–9% developed CIN (6). At 90 days, however, only ∼1% required dialysis, ∼1% had persistent kidney impairment, and ∼2% had died. Of note, this trial restricted enrollment to individuals with moderate to severe chronic kidney disease (baseline eGFR of 15 to 44.9 mL/min/1.73 m2 or eGFR of 45 to 59.9 mL/min/1.73 m2 with concurrent diabetes mellitus) (6).

Unfortunately, no angiography study can be done without contrast to serve as a control in order to fully delineate the effects of contrast. Also, one might argue that the lack of effect of interventions is in part due to the lack of significant toxicity of contrast in the context of fluid administration. Even in the most frequently used CIN risk prediction model (1), volume of contrast exposure contributes far less to the risk score compared to other clinical factors such as chronic kidney disease, presence of hypotension, congestive heart failure, or diabetes mellitus. Thus, it remains unclear whether kidney injury that occurs following contrast administration is due to the contrast itself or independent of the contrast.

Historical studies reporting an association of contrast material with AKI were done in the context of high-osmolar and ionic forms of iodinated contrast, likely larger infusion volumes, and in the absence of adequate hydration. Findings in these recent studies, with a trend toward the judicious use of safer agents in well-hydrated patients, suggest that the concern for CIN may be significantly less than we have previously anticipated. As such, we conclude that in cases where the administration of contrast is deemed to be likely helpful, we should rethink our risk-benefit analysis when considering risk of CIN.