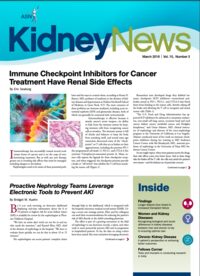 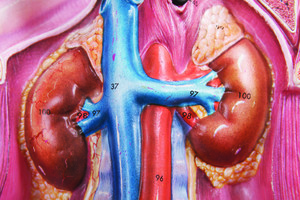 Investigators who are designing clinical trials and preclinical studies have realized that results found in males do not always hold true in females, and that there are clear differences in the sexes that should be considered when preventing and treating a wide variety of health issues. Kidney researchers also note that because female physiology is optimized for successful reproduction—which entails large fluctuations in vascular, hemodynamic, and renal function—it’s likely that female kidneys have important differences from those of males.

With this in mind, a team led by scientists at the Keck School of Medicine of the University of Southern California, Los Angeles, recently conducted a study to compare female and male nephron organization and physiologic function.

In their study, which was conducted in rodents and was published in the Journal of the American Society of Nephrology (JASN), the investigators applied quantitative immunoblotting to generate profiles of transporters, channels, claudins, and selected regulators in both sexes.

“The study revealed significant differences: the female rat nephron excreted a saline volume challenge more rapidly than males, which was attributed to less sodium reabsorption by transporters in the early part of the kidney nephrons,” said lead author and graduate student Luciana Veiras. “This increased volume flow to the later part of the nephrons where sodium transporters were more abundant and activated, a pattern that facilitates renal potassium elimination as well.”

The researchers noted that this pattern could allow for fluid retention adaptations required of pregnancy and lactation.

“We know that pronounced fluid retention is required in pregnancy and lactation. We propose that the baseline transporter profile is positioned for upregulation of fluid reabsorption without accompanying hypertension: raising reabsorption in the early nephron—where it is lower than in males—would increase the salt, water, and potassium reabsorption needed to support the development of the offspring,” said senior author Alicia McDonough, PhD. These are important areas for future consideration as they could impact the treatment of electrolyte disturbances during pregnancy, such as preeclampsia.

The findings relate to previous observations that female rodents are resistant to hypertension in response to hypertensive stimuli or genetic hypertension, and that female humans have lower rats of hypertension than males before menopause. The latest results suggested that female rats could maintain salt balance at lower blood pressures when faced with stimuli or injuries that decrease sodium excretion. “In fact, the female pattern of salt transport and transporters resembles what is seen in a male exposed to hypertensive stimuli. Said another way, the females are optimized for excreting salt, which explains why a rise in blood pressure is not necessary in order to maintain salt and water balance in response to hypertension stimuli,” said Veiras. Interestingly, after menopause, female humans lose this “advantage,” she said.

The JASN study also noted that the mouse female nephron has a similar transporter profile (lower in early nephron, higher in later nephron vs. males), but did not exhibit such pronounced differences in responses to saline and potassium challenges.

“This study demonstrates there are, indeed, sexual dimorphic characteristics of renal transporters as well as consequential physiologic differences at baseline,” said Veiras. “While some sex-specific transporter differences had been reported previously in the literature, this study provides a comprehensive map of transporter abundance, activation, and the physiological impact important to understand sexual dimorphisms in function and pathophysiology. These baseline findings will be useful to investigators probing effects of gene manipulations, pathologic stimuli, or disease progression in the two sexes.”

The findings lay the groundwork for a variety of preclinical and clinical studies that should be pursued. “Whether the differences determined for rats and mice pertain to humans is the most important question and warrants careful investigation, perhaps by combining non-invasive physiologic assays and urinary biomarkers,” said McDonough.

Importantly, the findings reveal that sexual differences should be considered for the treatment of common kidney-related disorders including hypertension, diabetes, and kidney stones, which all involve renal transporters.