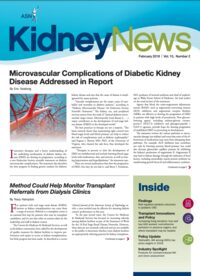 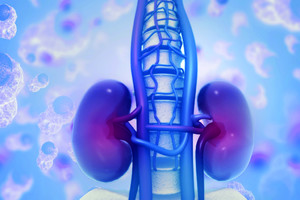 It is well established that kidney transplantation is the treatment of choice for patients with end stage renal disease (ESRD), as this treatment modality has been shown to provide improved patient survival and quality of life compared with dialysis (1). In an ideal system, patients in need of a kidney transplant would receive one as soon as the need arises. Unfortunately, the well-described mismatch between a limited number of available organs and the larger number of patients in need of a transplant makes this impossible, necessitating policies for the allocation of this limited resource. Available organs had been, until recently, allocated to potential recipients based on an algorithm that primarily weighed “time on the waitlist from the moment of listing.”

Under this system there were several limitations: The system did not take into account matching organs and recipients for graft longevity posttransplant, leading to a significant re-transplant rate. There was variability in access to transplantation depending on level of anti-HLA antibody sensitization, blood type, and geographical location. And there was a higher than desired organ discard rate leading to underutilization of kidneys that could have been potentially transplanted.

To address these limitations and to increase the efficiency of kidney allocation, the United Network for Organ Sharing (UNOS) and the Organ Procurement and Transplantation Network (OPTN) implemented a new kidney allocation system (KAS) in December 2014.

Based on limited data this new report is certainly compelling, but it begs the question, “Has the new KAS benefited patients?” This question is particularly contentious because when the allocation criteria to a limited resource are modified, the waiting time might become shorter for some patients and longer for others. The Equity in Access Report released in August 2017 may provide some insight to help answer this question (4). This report relies on a recently developed metric, Access-to-Transplant Score (ATS), a numerical measure developed to quantify the variability in expected waiting times for receiving a deceased donor kidney transplant among waitlisted patients. After implementation of KAS, the overall ATS among waitlisted candidates has not just decreased, but also remained relatively stable suggesting that KAS has improved equity in access to deceased donor kidney transplants. Long-term data will provide further clarification to this question.

As we look back at the past and now at the present, we must ponder the future implications of KAS. Currently, the data generated after KAS implementation remain in a state of flux. If current trends persist in upcoming reports, we would expect an abrogation of the bolus effect, which should help provide much more reliable data for analysis. At that juncture one would predict an improvement in patient and graft survival, as there would a decrease in the proportion of transplants performed on patients with disproportionally high dialysis time and cPRA, approximating or surpassing outcomes prior to KAS. Projected outcomes of longevity matching, one of the goals of KAS, should become clearer. If the outcomes are as expected one could see an increase in graft survival in groups receiving lower KDPI grafts with a concomitant decrease in re-transplant rates. One point of re-examination may include adjustment of priority points assigned to highly sensitized candidates. Other areas of modification may focus on addressing the discard rate of higher KDPI kidneys as a means to increase utilization.

Finally, the new KAS is far from perfect. Persistent disparities in access to deceased donor organs still exist. However KAS has, as a whole, benefited our patients. Overall the data show that many difficult-to-match patients, those who were once thought of as “un-transplantable,” are now being transplanted. In a sense, KAS implementation has provided these patients with a “new lease on life,” which ultimately is our mission and goal as clinicians.