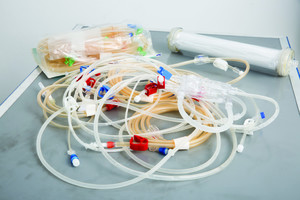 The retrospective cohort included 211 undocumented immigrants with ESRD treated at three US centers between 2007 and 2014. Patients at centers in Denver and Houston received emergency-only dialysis based on signs of critical illness. Patients treated at a San Francisco hospital received standard dialysis, scheduled three times weekly. The main outcome of interest was mortality at 3 years, adjusted for propensity to undergo emergency versus standard dialysis.

The patients were 125 men and 86 women, mean age 46.5 years: 169 received emergency-only dialysis and 42 received standard hemodialysis. The standard dialysis patients were more likely to have an arteriovenous fistula or graft in place when starting dialysis and had higher albumin and hemoglobin levels.

On adjusted analysis, the hazard ratio for death among patients receiving emergency dialysis was 4.96 at 3 years, increasing to 14.13 at 5 years, compared to those receiving standard dialysis. Similar results were found when the analysis was limited to Hispanic patients.

At 5 years, the rate ratio for acute care days in the emergency-only group was 9.81. The rate ratio for ambulatory care visits was 0.31, compared to standard dialysis, and there was no significant difference in the rate of bacteremia episodes. Compared with the entire US dialysis population, 5-year age-standardized mortality ratios were 2.26 for undocumented patients receiving emergency-only dialysis and 0.86 for those receiving standard dialysis.