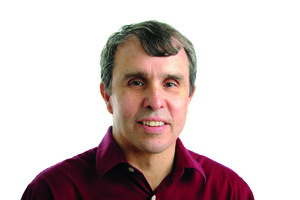 Ascientist who won a Nobel Prize for his work in the area will deliver a state-of-the-art lecture on “Imaging Cellular Structure and Dynamics from Molecules to Organisms” on Thursday, October 25.

The speaker, Eric Betzig, PhD, is a senior fellow at the Janelia Research Campus of the Howard Hughes Medical Institute in Ashburn, Va. He was co-recipient of the 2014 Nobel Prize in Chemistry for his role in developing super-resolution microscopy, particularly his invention of photoactivated localization microscopy (PALM).

Dr. Betzig followed an interesting path to this discovery. After earning a PhD in applied physics at Cornell University, he became a principal investigator at AT&T Bell Labs. There, he extended his thesis work on near-field optical microscopy, developing the first method to break the diffraction barrier in light microscopy. He explored many applications, including high-density data storage, semiconductor spectroscopy, and super-resolution fluorescence imaging of cells. By 1993, he held a world record for data storage density. He recorded the first super-resolution fluorescence images of cells and was the first to image single fluorescent molecules under ambient conditions, determining their positions to better than 1/40 of the wavelength of light.

Frustrated with technical limitations, Dr. Betzig quit science. In 1996, he became vice president of research and development at his father’s machine tool company, where he developed a high-speed motion control technology based on an electrohydraulic hybrid drive with adaptive control algorithms. Commercial failure of this and the other technologies he developed there left him unemployed in 2003 and looking for new directions.

During this period, he teamed with his best friend and Bell Labs colleague, Harald Hess, to invent the super-resolution technique PALM that led to the Nobel Prize.

From 2005 to early 2018, he was a group leader at the Janelia Research Campus, where he continues to work developing new optical imaging technologies for biology.

Dr. Betzig holds 28 U.S. patents. His other honors include receiving the William L. McMillan Award from the University of Illinois and a National Academy of Sciences Award for Initiatives in Research.