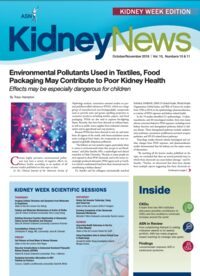 Fall in Washington, DC, during election years is typically known for being a slow time in the nation’s capital. For the kidney community, however, August and September of 2018 are proving to be anything but slow.

As the 2018 fiscal year for the federal government comes to a close on September 30, lawmakers are busy finalizing legislation to fund the government. In late August, the Senate passed a funding bill providing, among other provisions, the $2 billion increase for the National Institutes of Health (NIH) that ASN has been advocating for, and House lawmakers are rumored to be keeping the Senate spending levels in their legislation.

ASN has also been working to secure inclusion of language with the funding bill that would support KidneyX, living donation, and further study of Medicare reimbursement policy for immunosuppressive medications. Increasing funding for the NIH, as well as support for groundbreaking initiatives like the Kidney Precision Medicine Project are among the messages the 75 advocates participating in Kidney Community Advocacy Day took to legislators in late September.

In a win for living donors, the Department of Labor issued clarification in August 2018 that people who donate organs are eligible to receive job protection under the Family and Medical Leave Act (FMLA). This change guarantees that organ donors may take time to recover after donation surgery without the risk of losing their job, a significant barrier many potential kidney donors face. Ensuring FMLA protection for living donors has been a longstanding policy priority of ASN.

ASN leadership and staff have also been spending time with various institutes across NIH to discuss priorities for ASN in two areas: 1) new basic, translational, and clinical science research initiatives to spur innovation in the diagnosis, prevention, and treatment of kidney diseases; and 2) approaches to address the declining interest in academic careers in nephrology. ASN met with the National Heart, Lung and Blood Institute, the National Institute of Allergy and Infectious Diseases, the National Institute of Diabetes and Digestive and Kidney Diseases (NIDDK), and the National Institute on Minority Health and Health Disparities. The society encouraged collaboration across institutes to ensure the success of innovative projects including the Kidney Precision Medicine Project, organized by NIDDK, and KidneyX, coordinated by ASN and the U.S. Department of Health and Human Services.

ASN will continue to meet with institutes across NIH as well as other federal research partners in the coming months to raise the profile of kidney diseases, promote more kidney-related research, and encourage more collaboration with NIDDK.

September also marked the conclusion of the comment period regarding proposed changes to physician payment as well as to the End-Stage Renal Disease (ESRD) Prospective Payment System (PPS) and Quality Incentive Program (QIP) proposed rule. The Centers for Medicare & Medicaid Services (CMS) proposed to ease documentation requirements for Evaluation and Management (E/M) coding and—in a troubling move—to collapse payment for E/M code levels two through five into a single payment, among other proposed changes. ASN, together with virtually every other medical professional society, has identified a host of concerns with the E/M reimbursement proposals.

The society collaborated with a broad coalition of more than 40 societies to develop a coordinated response and speak with one voice to CMS on the issue. ASN also participated in a meeting with CMS Administrator Seema Verma and CMS Chief Medical Officer Kate Goodrich, MD, to discuss the proposed rule, a conversation that influenced a response strategy. ASN and the coalition urged CMS to finalize several of its proposals to ease the documentation burden now, but to work with the entire medical professional community over the coming year in a collaborative, transparent process to ensure appropriate reimbursement while minimizing unintended consequences before finalizing any changes to payment.

The PPS/QIP rule proposed several changes in line with recommendations ASN made in the past, including removing some measures from the QIP, creating a more predictable pathway to add new drugs to the bundle, and exploring efforts to increase transplantation and home dialysis. Other areas of concern remain, such as the flawed Bloodstream Infection measure and the lack of a pathway to add new devices to the bundle, and in these instances ASN provided constructive recommendations to the agency.