How will dialysis centers in your state fare under the ESRD bundle? For most states, drops in reimbursements are likely under the latest CMS proposal. Blue bars reflect the original model, based on the Kidney Epidemiology and Cost Center (KECC) analysis; yellow bars reflect the latest bundle proposal by the Centers for Medicare & Medicaid Services (CMS).The multiplier reflects the case-mix adjustment used in the KECC analysis. 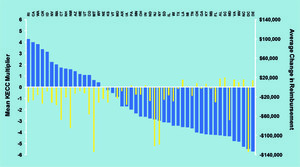 Reimbursements May Drop for Some Dialysis Facilities under Bundled Payments

When it comes to the financial impact of the proposed ESRD bundled payment system, all dialysis centers may not be created equal. A study presented at Renal Week 2009 suggested that dialysis units with certain characteristics and in some regions—including some of the most impoverished regions in the United States—could see disproportionate cuts in Medicare payments under the new system.

Under a bundled payment system, Medicare makes a single reimbursement for all the hospital and physician care for kidney disease, rather than separate payments for the facility and physicians.

“Based on facility-level analysis, it appears there may be unanticipated geographic variation in facility reimbursement payments,” according to lead author Sumit Mohan, MD, of Columbia University. The findings raise concerns that some dialysis centers—and the patients they serve—may be at risk under the Centers for Medicare & Medicaid Services’ (CMS) proposed Medicare bundle.

Mohan, along with co-authors William McClellan, MD (Emory University School of Medicine) and Rich Mutell, MBA, MA (Amgen), retrospectively analyzed data from all U.S. dialysis centers, drawn from CMS and other federal sources. Their goal was to identify the geographical characteristics of dialysis centers at risk of reduced payments under the proposed bundled payment system.

Their initial study looked at the impact of the model developed by the Kidney Epidemiology and Cost Center (KECC) at the University of Michigan, commissioned by CMS. KECC estimated that, based on ownership characteristics, some types of dialysis facilities would be more likely to see reduced reimbursements—specifically, large dialysis organizations (LDOs), defined as corporations owning 100 or more freestanding dialysis units located in more than one state, and hospital-based dialysis units. “We used the KECC estimates for our model, which found about a 0.9 percent reduction for the LDOs and an average 1.6 percent reduction for hospital-based dialysis units,” said Mohan.

The prospect of reduced payments to hospital-based dialysis units raised special concerns because these centers tend to be a safety net for patients who might otherwise face difficulties accessing dialysis services, according to Mohan. “They tend to have a larger percentage of uninsured patients or they tend to be geographically isolated units.”

However, when the researchers re-ran the analysis using the preliminary estimates issued in September by CMS using a slightly different payment model, a different picture emerged. Under the revised CMS plan, LDOs take an even bigger hit. “It’s now a 3.7 percent reduction for the LDOs, i.e., the three largest chains in the country,” said Mohan. Meanwhile, the CMS proposal seems to reverse the projected drop in reimbursements forecast under the original KECC model. “The hospital-based units actually gained somewhere in the range of 3.7 to 4.0 percent.”

Geography appears to be another factor affecting the likelihood of reduced reimbursements under the ESRD payment bundle. “Our facility-level analysis suggested considerable geographic variation in the impact of the bundled payments on facilities across the country, with adversely impacted facilities being predominantly in the South,” said Mohan. Their original analysis based on the KECC model suggested that dialysis centers located in the South and Southeast—virtually all of ESRD Network regions 5, 6, 7, and 8—were at risk of receiving lower reimbursements.

Why was the South so hard hit? The Congressional mandate to CMS included the requirement to use some type of geographical weightage, Mutell explained. “Our first analysis based on KECC facility characteristics used census region for that geographic weightage. That is why we saw such stark results in certain geographic areas. It was when we modeled the CMS data using a wage index refined to a lower level of geography—specifically, the Core-Based Statistical Area (CSBA)—that we saw the similarities between low wage index areas and poverty.”

“The areas that have a low wage index are relatively poor and are also the areas that have facilities that get hit with lower reimbursement rates,” said Mohan. “If you actually look at the wage index map, it almost superimposes on a poverty map. And most of the poverty in the United States is in the South and Southeast.”

This echoes concerns about reduced access to pre-ESRD care in the same areas. Previous research led by McClellan—published earlier this year in Journal of the American Society of Nephrology (2009; 20:1078–1085)—found geographic clusters of suboptimal care for patients with advanced chronic kidney disease in the South and Southeast. The result was that patients in these areas were less likely to receive recommended pre-ESRD care, which in turn led to poorer survival after starting dialysis.

McClellan emphasized that the disproportionate effects on impoverished regions and patients are unintended consequences of both the original KECC model and the subsequent CMS proposal. “This is just a consequence of the tools that they had to use to come up with a case-mix adjustment rate that met their revenue adjustment goals,” he said.

The quality of dialysis care provided in high-poverty areas has emerged as another interesting piece of the puzzle. “When we compared dialysis facilities most likely to see lower reimbursements, we found they performed better than the rest of the country on CMS’s quality measures for adequacy and achieving hemoglobin concentrations above 10 g/dL,” said Mohan. “And yet, under the CMS proposal, those are the facilities that you’re going to take money away from, disproportionately.”

Prompted by these findings, one of McClellan’s students, Eiichiro Kanda, MD, matched data from the previous study on pre-ESRD care to the new data on facility characteristics of care. “As we found previously, the care prior to going to the dialysis center was heavily influenced by the poverty of the community, and that tended to cluster in high-poverty areas,” said McClellan. “However, once patients got into that dialysis center, their care was no longer influenced by the area of poverty.” (Kanda also presented his research at Renal Week 2009.)

Thus poverty in the surrounding community is much less likely to affect the center-to-center variability in care, as opposed to pre-ESRD care. “CMS has done a pretty good job at removing some of the impact of poverty after patients get into the system,” said McClellan.

Call for a More Sophisticated Approach

McClellan added, “Quite apart from the pros and cons of establishing rates and bundling services as cost containment measures, we would hope that the geographic consequences, particularly as they impact disadvantaged populations—the very populations CMS is committed to bringing more equitable health care—would be examined in a more sophisticated manner than they have been to this date.”

Some of the ownership and geographic variations go hand in hand, reflecting differences in the way dialysis services are provided in different parts of the country. “The genesis of all this work was simply putting all the dialysis facilities on the map and seeing where they clustered geographically,” said Mutell. “When we did that, we saw in the North how it’s dominated almost by hospitals, while other areas of the country are pockets where the medium dialysis organizations operate.”

A more nuanced approach to reimbursement would consider local differences in dialysis care, according to Mutell. “The point of looking at the impact of location is that when you try to apply something universally across the board and don’t take into account these rather unique regional and geographical characteristics, it could lead to some of these unanticipated consequences that we’re seeing.”

The researchers found some other important differences in their updated analysis of the proposed CMS bundle, compared to the original analysis based on the KECC model. “When the original KECC analysis was done, the geographic factor that was supplied to us was at the census region level, where we saw some of those bigger swings,” said Mutell. “In the follow-up analysis, we’re looking at a more granular wage index area.”

The updated analysis showed differences in how the states were ordered in terms of their percentage of dialysis centers at risk of reduced reimbursements—including a less consistently negative impact on the states in the South and Southeast. “More states now have a net statewide loss,” Mohan said. “The average reimbursement per state will be lower, and far fewer states will show a gain. But what states are in what category has switched around quite a bit.”

Other effects of the CMS proposal include eliminating disincentives to peritoneal dialysis and home dialysis. Several other critical issues remain to be worked out, such as the impact of policies regarding Medicare Part D drugs.

Mohan and colleagues believe their findings have important implications for the final CMS bundle. At press time, the researchers were working to prepare a summary of their findings before the scheduled end of the CMS comment period in mid-December.

The aggregation of high-poverty areas in the Southeast deserves special consideration in designing the final bundle plan, McClellan said. “If government policies for health care reimbursement shortchange those poor communities, then it may have consequences that we’d rather avoid—especially since, as seems to be the case, some of the things that have been done in the U.S. dialysis system may actually be benefiting those populations.

“The system is capable of getting beyond the poverty issues and poor education to providing decent care for everybody, which I think is a goal that everybody, no matter where they fall on the health care reform debate, would strive for, and that’s equitable, equal high-quality care—for everybody.”

The researchers don’t claim to have “the truth or the answer” to the best ESRD payment bundle, McClellan added. “What we’re doing is holding a mirror up to this process and letting CMS see it as we see it. And asking them, Is this picture accurate, and does it depict what you really want to see from your policy initiatives? And if we get them thinking about it, it will really be a major accomplishment.”