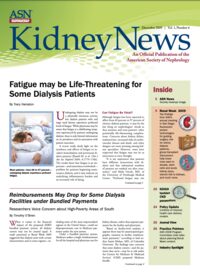 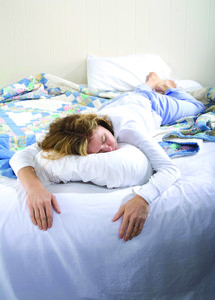 Fatigue may be Life-Threatening for Some Dialysis Patients

Undergoing dialysis may not be a physically strenuous activity, but dialysis patients with end stage renal disease experience profound levels of fatigue. While physicians may be aware that fatigue is a debilitating symptom experienced by patients undergoing dialysis, there is only limited information on its prevalence and its association with patient outcomes.

A recent study sheds light on the incidence and effects of fatigue in incident hemodialysis and peritoneal dialysis patients (Jhamb M, et al. Clin J Am Soc Nephrol 2009; 4:1779–1786). The results show that fatigue is an important—and sometimes overlooked—problem for patients beginning maintenance dialysis, and it may indicate an underlying inflammatory burden and an increased risk of dying.

Can Fatigue Be Fatal?

Although fatigue has been reported to affect from 60 percent to 97 percent of chronic dialysis patients, it may be the last thing on nephrologists’ minds as they monitor and treat patients’ other potentially life-threatening complications. Concerns about kidney failure, malnutrition, increased risks of cardiovascular disease and death, and other dangers are more pressing among kidney specialists. However, some have suspected that fatigue may not be as innocuous as once thought.

“It is my experience that patients have different interactions with dialysis and that substantial numbers of patients are washed out after treatments,” said Mark Unruh, MD, of the University of Pittsburgh Medical Center. “Profound fatigue may not only interfere with daily activities, but it may also influence adherence to the medical regimen.” If true, this could have serious consequences for patients’ health.

Unruh and his colleagues set out to determine the effects of fatigue on dialysis patients by examining the correlates of self-reported fatigue at initiation of dialysis and after one year. They assessed the extent to which fatigue was associated with health-related quality of life and survival in 917 dialysis patients.

Patients in the study were a subpopulation of participants in the Choices for Healthy Outcomes in Caring for End-Stage Renal Disease (CHOICE) Study, a national prospective cohort study of incident hemodialysis and peritoneal dialysis patients that enrolled patients from 1995 to 1998. Unruh’s study (which followed patients through 2004) included participants who completed the CHOICE Health Experience Questionnaire (CHEQ), which includes SF-36 vitality scale questions that measure the continuum of fatigue. Predictors of fatigue—including sociodemographic and psychosocial factors, dialysis-related factors, biochemical variables (such as inflammatory markers), comorbidities, and medications—were used as covariates.

The researchers also analyzed the effect of change in vitality over one year on survival. The median survival for those with a decline in vitality at one year was 3 years, compared with 3.8 years for those with stable or improved vitality. Also, compared with patients who reported stable or improved vitality at one year, patients who reported a decline in vitality had a 41 percent increased risk of death (HR 1.41; 95 percent confidence interval 1.06–1.89, p = 0.02) after adjusting for age, sex, race, use of antidepressants, dialysis modality, albumin, creatinine, and other factors.

The investigators speculate that the existence of a pathogenic inflammatory factor common to fatigue and decreased survival may explain these findings.

Kidney researchers not involved with this study noted that the link between low vitality scores and an increased risk of premature death could be important, but it must be verified with additional studies. “In an epidemiological study such as this, causality cannot be proven,” said Srinivasan Beddhu, MD, associate professor of medicine at the University of Utah Health Sciences Center in Salt Lake City. “But this is a very important first step, and interventions that improve sleep quality or increased physical activity might improve vitality scores and survival.”

They also noted that the observed differences in survival among different types of patients on dialysis are intriguing. “A very interesting finding is that nonwhite race was associated with higher adjusted vitality scores,” said Alan Kliger, MD, clinical professor of medicine at Yale University School of Medicine in New Haven and past president of the Renal Physicians Association. “African Americans report more vitality and less loss of vitality than non-African Americans, so race appears to impact adaptation to dialysis. It’s not surprising that sociologic and economic factors impact adaptation to disease, but this finding deserves further study.”

Fatigue is clearly important to patients. Most—94 percent—of the dialysis patients surveyed would accept more frequent hemodialysis if it would increase their energy. Certain steps can be taken to counteract fatigue in dialysis patients.

“Physicians should screen dialysis patients for fatigue that interferes with quality of life and daily activities,” Unruh said. “In addition, they should ascertain if there are addressable causes of fatigue in the patient such as sleep disorders, mood disorders, hypothyroidism, and polypharmacy.”

A better understanding of the interactions between factors such as type of dialysis, sleep, depression, and cytokine production may help clinicians develop interventions to improve survival and quality of life among dialysis patients, Unruh said.

“The authors identify several potential avenues for intervention, including increased levels of physical activity,” said Nancy Kutner, PhD, director of the United States Renal Data System’s Rehabilitation and Quality of Life Special Studies Center and professor in the department of rehabilitation medicine at Emory University in Atlanta. “And although the etiology of fatigue is likely multifactorial, addressing depression may be a valuable intervention at least in a subset of patients.”

Clinical trials are in the works to address many of the unanswered questions about dialysis and fatigue. An ancillary study in the Frequent Hemodialysis Network Trial [supported by the National Institutes of Health (Kidney Int 2007; 71(4):349–359)] is examining the impact of dialysis on sleep and fatigue.