Legislation related to kidney disease by state and number of bills introduced during 2009 short session, as of May 22, 2009 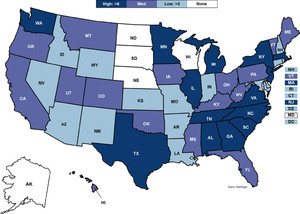 Although the year is only half over, as of July, 41 states will have ended their legislative sessions for the year. Of this group, 17 states will carry over bills to the 2010 session if they have already passed both the House and the Senate. Dealing with budget shortfalls and a crumbling economy continues to take up a large chunk of political time, but policy initiatives related to kidney disease and nephrology were still introduced, and some were successful in their passage.

Figure 1 provides a snapshot of the number of bills introduced during the 2009 session related to kidney disease, dialysis, transplantation, or organ donation. Below is a summary of what passed, what failed, and what’s still on the table.

Although budgets were tight this year, kidney disease treatment and research remained a priority for state policymakers. The Alabama legislature appropriated funds to both the National Kidney Foundation of Alabama and the Alabama Kidney Foundation (Act 2009-504) to support general operations and program activities, and also to the University of Alabama to operate a “Transplant Database” (Act 2009-550).

The University of Missouri will continue to receive funding for the “Missouri Kidney Program” if the bill is signed by the governor (HB 3). The Arkansas Organ Donation Trust Fund was given funding to increase organ donation education and awareness programs (Act 1499). Idaho showed its continued support for the Renal Disease Vocational Rehabilitation Program by keeping it afloat for another year (Session Law Chapter 328).

Alabama passed legislation to continue the work of its Chronic Kidney Disease Task Force, which submitted a report in 2007 (Act 2009-467). The original task force focused on studying the impact of chronic kidney disease (CKD) on Alabama citizens and producing recommendations for a cost-effective plan for early screening and diagnosis of the disease, while the 2009 task force will study the state’s role in assisting persons with CKD and state policy regarding the effective treatment and prevention of CKD. A “State CKD Plan” is due by 2013.

Texas enacted legislation this year to alter its CKD task force, which released a report in January 2009. The new legislation (HB 2055) extends the task force to 2011 and asks for development of a cost-effective plan for prevention, early diagnosis, and management of CKD, as well as for surveillance and data analysis to assess the impact of CKD. With this legislation, Texas may be positioning itself to receive funding for statewide CKD demonstration projects as listed in the Medicare Patients and Providers Act of 2008 (MIPPA), although no money has been appropriated to these demo projects as of yet. Tennessee (SB 1566) and New Jersey (AB 1767) both introduced legislation to create their own state task forces on CKD, and both are still pending committee approval.

Screening and diagnosis of CKD

As a direct result of the original Texas CKD task force recommendations, a bill was introduced (HB 2330) requiring mandatory reporting of estimated glomerular filtration rates (eGFR) by laboratories for any serum creatinine test ordered for a patient 18 or older. If passed, Texas will join six other states with mandatory eGFR reporting. At press time, the bill had passed both the House and Senate and is awaiting the Governor’s signature.

New York has also introduced mandatory eGFR legislation that is currently sitting in committee (AB 5158). West Virginia tried and failed to pass legislation (HB 3288) that would have included an annual screening for kidney disease for public employees as determined “medically necessary” by their physician and based on National Kidney Foundation guidelines using a combination of blood pressure, urine protein/albumin, and serum creatinine evaluations.

Florida has become the 24th state to offer Medigap coverage to end stage renal disease patients under 65. Medigap is a supplemental insurance plan administered by the federal government that helps patients pay Medicare deductibles and co-pays. The “Alonzo Mourning Access to Care Act” (HB 675) was signed by the Governor in June and coverage will start in October 2009. Illinois had a similar bill in play this session (HB 3592), but it died in committee.

Kentucky and New York worked on legislation to protect dialysis patients from unfair insurance company practices. In some cases, insurers have moved out of a preferred provider network or dropped the option to choose an out-of-network dialysis facility, creating a scenario where patients must travel long distances and pay unfair premiums for dialysis care.

National organizations like the National Renal Alliance and the Kidney Care Council argue that dialysis patients should be provided a choice regarding whether to go out of network. If a patient chooses to go out of network, knowing that they must pay higher premiums, those premiums should still be fair and not cause an undue burden.

Although the bill died in committee, the state was successful in passing a resolution directing the Cabinet of Health and Family Services to estimate how much it costs state taxpayers when dialysis patients drop private coverage during their first 30 months on dialysis (when private insurance is primary), possibly as a means to convince policymakers that real legislation is needed to save the state money by preserving private coverage for dialysis patients. The resolution encourages private insurance companies to enhance continuity of care measures and threatens future legislative action if companies continue placing an undue burden on dialysis patients.

New York has a bill currently in session that would require all state insurers to provide at least 10 out-of-network dialysis sessions so that patients can travel. However, the bill is likely to hit a snag with its provision to allow insurers to pay out-of-network providers no more than what they pay for in-network treatments (AB 213/SB 1803).

Connecticut, Delaware, and Mississippi worked this session to make transportation less of a burden on dialysis patients. Two of these states had bills in committee at press time to continue appropriations to existing programs—Connecticut’s “Dial A Ride” program (HB 5427) and Delaware’s Chronic Renal Disease Program (HB 25). Mississippi was successful in passing legislation to extend funding for a program to provide transportation to elderly and/or disabled patients with incomes < 135 percent of the federal poverty line and who were previously covered under Medicaid’s Poverty Level and Disabled (PLAD) category, which is no longer offered in Mississippi (Session Law Chapter 415).

Legislation to reimburse living organ donors through tax credits or paid leave was also popular this session, with eight states putting bills into play, four of which did not make the crossover deadline and died in committee (Hawaii, Illinois, Kentucky, and West Virginia). Bills in Kentucky (HB 36/BR 204), New York (SB 4265), New Jersey (SB 1003), and Massachusetts (SB 1333) that would offer tax deductions or tax credits of up to $10,000 to help citizens recoup costs from travel, lodging, and lost wages as a result of organ donation are still viable this year. Possibly as a result of budget issues, two states (Minnesota and Oklahoma) tried to repeal already existing tax credits, but both pieces of legislation died in committee.

New York may be joining Illinois with the passage of a bill to allow HIV-to-HIV organ donation. The legislation (SB 4846) would allow citizens who have tested positive for HIV/AIDS to donate their organs to a person who has also tested positive for exposure to HIV/AIDS, but only in the case of immediate threat of death for the organ recipient. The bill is still in session.

Washington state enacted two bills this session to provide further protections for transplant recipients. Public Law 82 mandates that any insurance plan issued or renewed starting in 2010 must reduce the organ transplant benefit waiting period by the amount of time a covered person had prior creditable coverage (coverage equal to their current insurance plan), and Public Law 487 mandates that state insurers that offer transplant coverage increase the lifetime payment cap to $350,000.

Eight states worked this session to protect immunosuppressive drug prescription coverage for transplant recipients. Georgia (HB 523), Massachusetts (SB 589), Michigan (SB 314), and Tennessee (SB 109/HB 635) introduced legislation barring pharmacists from changing immunosuppressant medications without first getting written permission from the patient and/or the ordering physician. The Georgia bill died in committee, but legislation is still active in the other three states.

Oregon has a bill currently in Senate committee that would require the state department of human services to pay for brand name rather than generic immunosuppressive drugs prescribed in connection with organ transplants (SB 876). California continues to try to move a bill that would extend Medi-Cal coverage (state Medicaid program) for anti-rejection medication for up to three years following an organ transplant unless patients become eligible for Medicare or private insurance that will cover these expenses (AB 998).