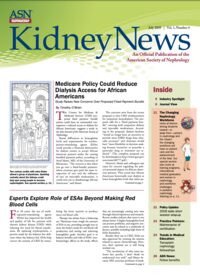 International Medical Graduates in Nephrology: Benefit, Challenge, or Both?

For years, international medical graduates (IMGs) have comprised a significant percentage of the fellows in nephrology training programs who prepare to provide treatment to the rapidly growing population of patients suffering from kidney disease. In the 2006–2007 school year, physicians trained in foreign institutions constituted 47 percent of the fellowship class, an increase over the historic low of 38 percent in 2002–2003, and a return to the high percentages posted in the late 1990s. IMGS comprised 59 percent of all nephrology fellows in 1997–1998 (Table 1.). 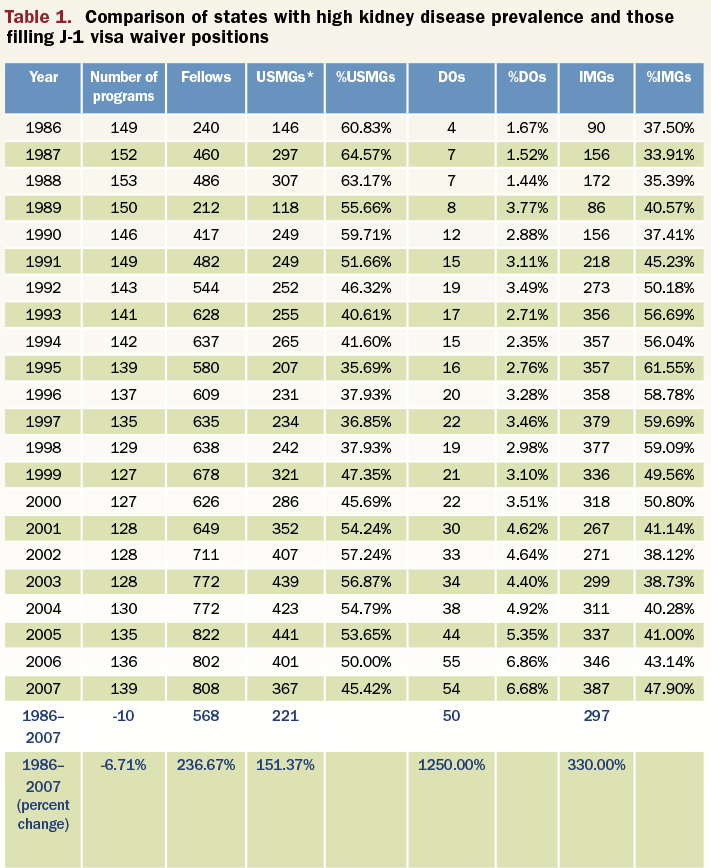 While IMG interest is vital to the success of nephrology training programs and the nephrology field as a whole, their high concentration in the nephrology arena portends a number of potential challenges.

Compared with other internal medicine specialties, nephrology programs attract a higher proportion of IMGs. Of internal medicine specialties with a comparative number of participating programs in the 2009 Match, nephrology programs matched the greatest percentage of IMGs (49 percent), according to Donald Kohan, MD, PhD, director of the nephrology training program and assistant dean of graduate medical education at the University of Utah School of Medicine, and Mark Rosenberg, MD, director of the division of renal diseases and hypertension at the University of Minnesota School of Medicine. Gastroenterology programs matched the fewest (19 percent), while rheumatology, endocrinology, and hematology/oncology were closest with 36 percent.

Many in academic medicine fear that the declining interest in primary care—and the disinterest among medical school graduates in internal medicine residencies—is the culprit behind declining numbers of U.S. graduates specializing in nephrology. Although that must play a significant role, why are other internal medicine specialties bearing less of the impact? If specialties that offer similar compensation are better able to attract U.S. medical graduates, members of the nephrology community should consider how to better market the specialty to physicians-in-training.

IMGs supplement the overall physician workforces of various medical specialties and historically have provided necessary care in medically underserved areas that are unable to attract U.S. physicians. Due to restrictions associated with the J-1 visa—a cultural exchange visa historically used by most IMGs—IMGs must return to their home countries for two years after the completion of training. To circumvent the return requirement, IMGs can apply for the Conrad 30 waiver program. This federal program allows each state to hire up to 30 foreign-trained physicians to practice in rural and inner-city areas in need of primary and specialty care.

According to American Medical News (March 10, 2008), 10,901 IMGs entered the United States on J-1 visas in 1995–96. That number has significantly declined. In 2006–07, only 6033 IMGs entered on J-1 visas. However, the net number of IMGs has significantly increased. Since 1978, the IMG workforce has more than doubled, and now IMGs comprise approximately 25 percent of all practicing physicians.

Rather than entering on the J-1 visa, IMGs are selecting the more expensive, yet less restrictive, H-1B visa. This change in immigration practice has led to a depletion of physicians interested in serving in medically underserved areas. In 1995, 1374 IMGs requested a J-1 visa waiver. In 2006, that number declined to 903. Ironically, a greater percentage of J-1 visa holders are applying for the waiver program (12.6 percent of J-1 visa holders in 1995 versus 15.0 percent in 2006).

Concerns about U.S. medical graduate interest in nephrology as well as geographic distribution are magnified when compared with data illustrating the impact of kidney disease across the United States. According to a state-by-state analysis of the Conrad 30 program, 10 states historically use all 30 of their available waiver slots. A review of the 10 states with the highest end stage renal disease (ESRD) prevalence rates identifies six states cross-referenced on both lists (Table 2.). 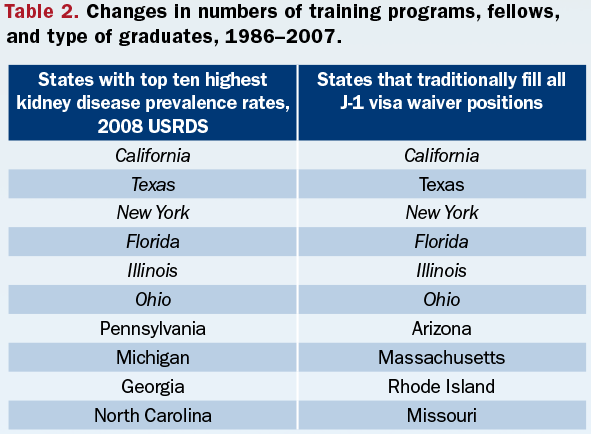 The states that need and use the waiver program are the same states that are in the greatest need of nephrologists to care for their large populations of kidney disease patients. If use of the J-1 waiver program continues to decline, many states may face serious physician shortfalls in medically underserved areas (not to mention that states that already have difficulty luring J-1 visa waiver applicants will face a virtual drought).

The problem is further exacerbated when reviewing the pediatric nephrology workforce. Nationwide, we face a significant workforce problem, with only one pediatric physician for every 167,000 children. In Georgia, where ESRD prevalence rates are the ninth highest in the nation, there is only one pediatric nephrologist for every 410,000 children. Yet many children’s hospitals are not included as “underserved areas,” even though they may require more subspecialty support.

Although many states allow IMGs to practice their designated specialties in underserved areas, some require they only practice primary care, even if the state illustrates growing specialty needs. California, Idaho, Nevada, North Dakota, and Utah all do not accept specialists into the Conrad-30 program. Considering California posted the highest ESRD incidence rates in 2008, according to the U.S. Renal Data System, it might be to the nephrology community’s benefit to encourage broader support for specialty care when the Conrad-30 program is up for extension in September 2009. According to Sen. Kent Conrad (D-N.D.), the original sponsor of the program, he plans “to expand and improve Conrad 30 through further legislation.”

By depending on IMGs to fill gaps in kidney care, the nephrology community must also consider medical challenges that extend beyond the United States. Some critics argue that an influx of IMGs into U.S. medical programs leads to a deplorable “brain drain” in which talented physicians are removed from nations in desperate need of skilled medical labor.

“There are always costs to the source country in terms of financial resources (investment in education) and human capital (gifted, ambitious people),” said Fitzhugh Mullan, MD, professor of medicine and health policy at George Washington University School of Public Health and Health Services in Washington, DC. “Moreover, many medical schools in source nations are influenced by the ‘Western aspirations’ of their students, so that their training programs are not well aligned with local patterns of disease and levels of technology.”

While attempting to distribute IMG physicians to underserved areas in the United States, we may be adding to the list of underserved areas worldwide in need of appropriate care. Does the nephrology community need to consider the international implications of the IMG influx, or should it encourage anyone willing to practice in the United States to flock to our medical schools, teaching hospitals, and community centers?

Without IMGs, the nephrology workforce would likely be in serious decline. IMGs supplement the general workforce and provide additional care in medically underserved areas. While not suggesting that IMGs interested in the profession should be discouraged or underappreciated, the nephrology community should assess why the specialty is less appealing to U.S. medical graduates and consider ways to encourage greater attention to diseases affecting the kidney.

Allison Haupt was ASN research policy coordinator until June 2009, when she left the Society to attend the New York University School of Law.