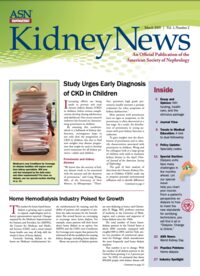 For the first time, the U.S. Centers for Disease Control and Prevention (CDC) has issued in effect a map of the regional incidence of diabetes. Although national survey data have shown that the overall incidence of diabetes has grown in the United States dramatically in the past decade or so, data now show a geographic distribution of the disease. The CDC looked at data from 1995 to1997, and from 2005 to 2007. Thirty-three states and territories had the data needed to conduct statistical analysis for the two different three-year periods. Forty states had enough data to analyze during the most recent period.

For perspective, in March 2007, the CDC reported on chronic kidney disease (CKD) between 1999 and 2004. The CDC analyzed the most recent data from the National Health and Nutrition Examination Survey (NHANES). Researchers determined that 16.8 percent of the U.S. population aged 20 or older had CKD, according to 1999–2004 data, compared with 14.5 percent from the 1988–1994 NHANES survey, an increase of 15.9 percent based on crude estimates of prevalence. People with diabetes or cardiovascular disease had a greater prevalence of CKD than those without. Thus, the diabetes study means even greater vigilance is needed to prevent or stem the increased prevalence of kidney disease.

The CDC concluded that effective population-based approaches to prevent obesity and increase physical activity might help to reduce the incidence of diabetes. In high-risk individuals, a 5 percent to 10 percent reduction in body weight coupled with 30 minutes of moderate physical activity five days a week resulted in a 58 percent reduction in diabetes over a three-year period, the CDC report noted.